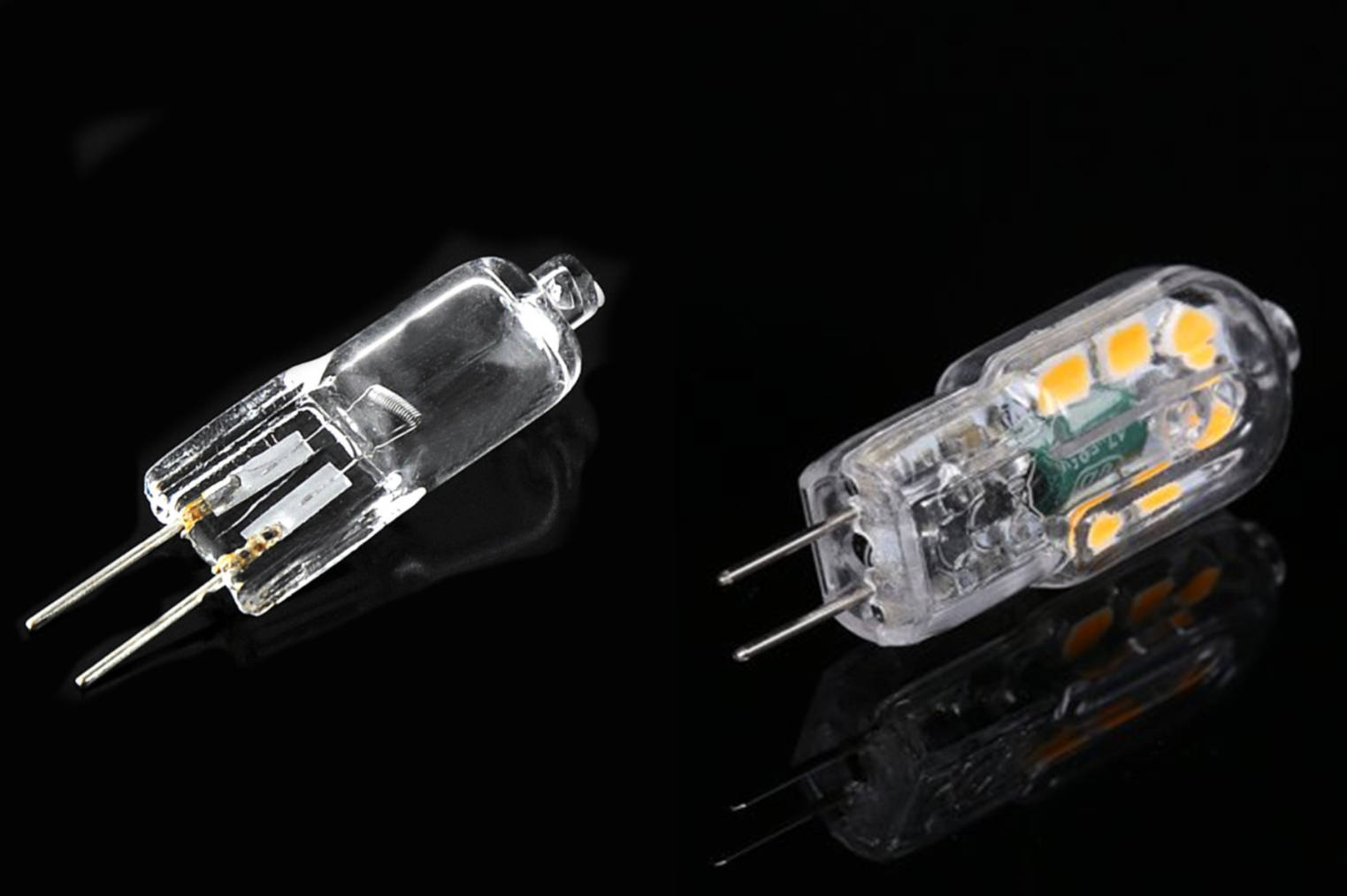 Halogens have drawn a lot of attention in the past. However, they have slowly dwindled in popularity as LEDs have entered the lighting industry.

Now you might be wondering which is the best for your lighting needs. Continue reading to learn more about the differences between halogen and LED light bulbs.

What are halogen light bulbs? 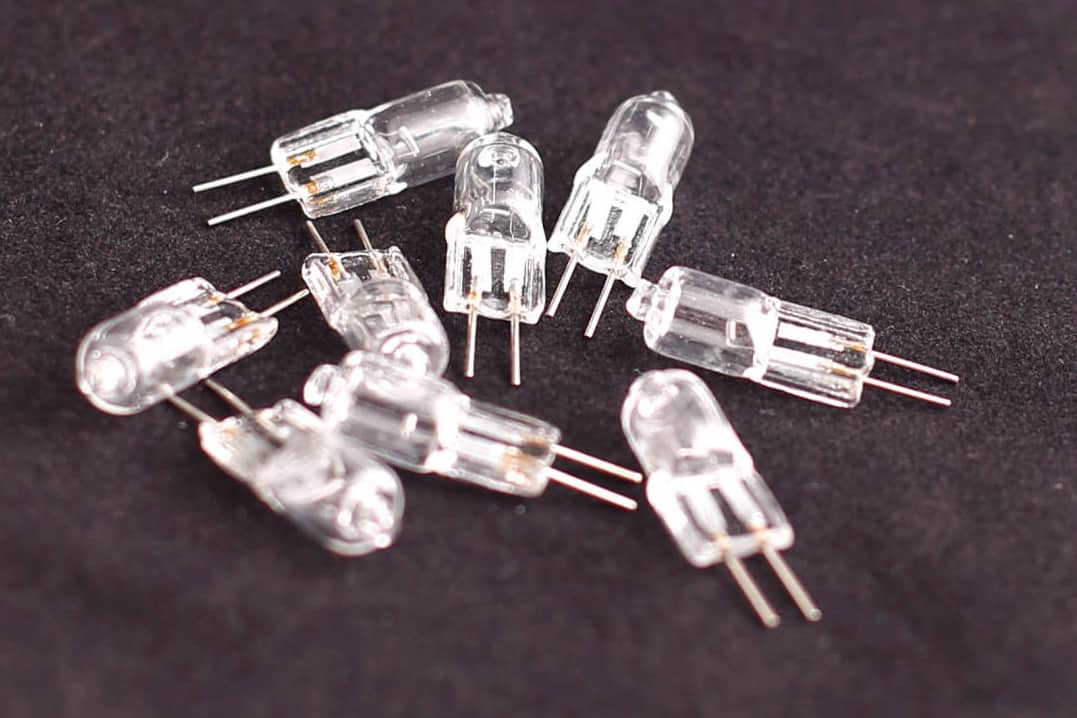 Halogen light bulbs are similar to incandescent bulbs in structure and operation. They use a filament enclosed in a small glass envelope full of gas. The envelope is so close to the filament that regular glass can melt if it gets too close to it.

Halogens are frequently used in accent lighting. Most of them feature a pin base, so you can only use them in fixtures built for them. Halogen lamps emit a bright, warm light that illuminates to maximum brightness once you turn on the switch.

What are LED light bulbs? 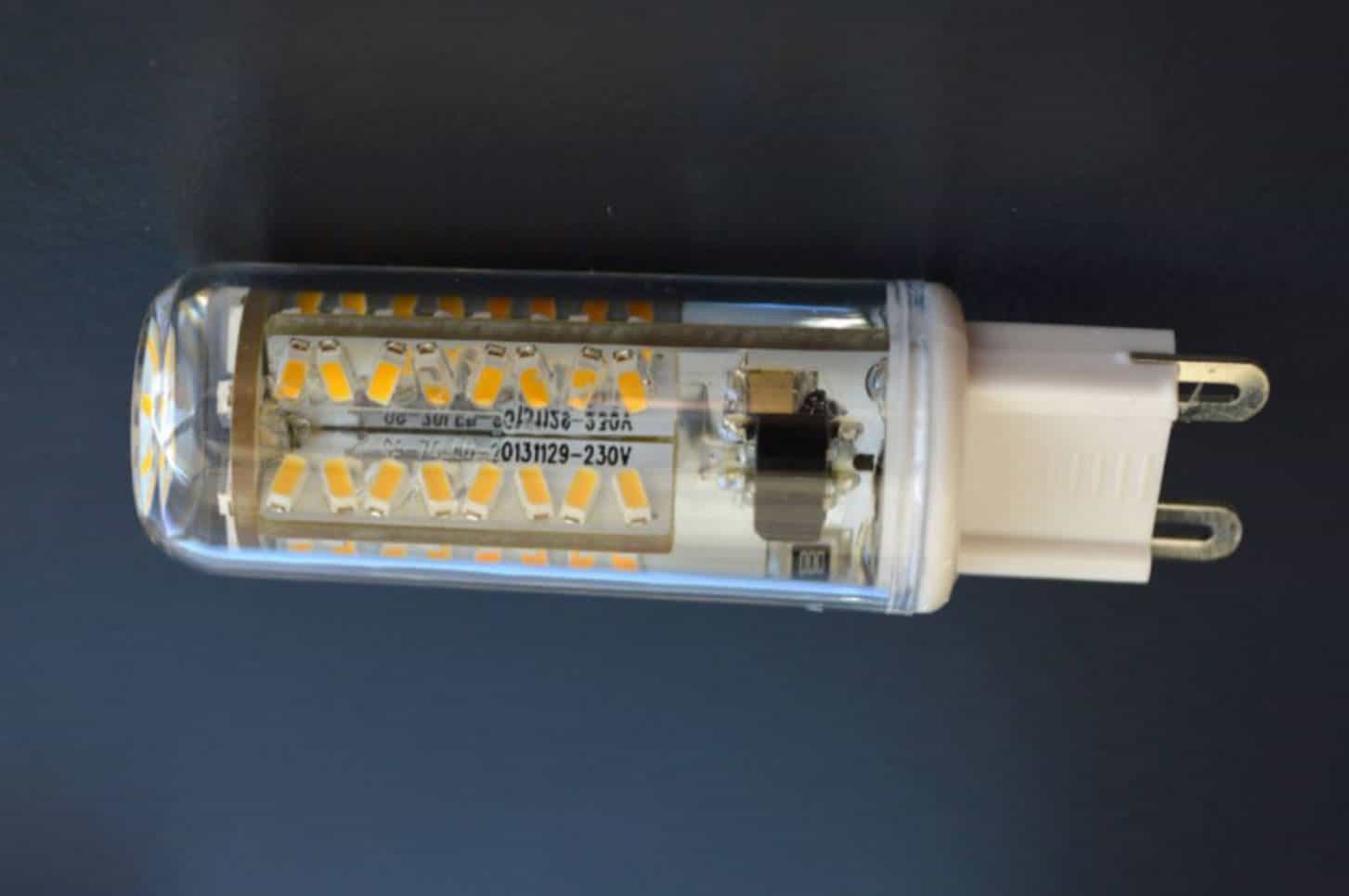 LEDs (light-emitting diodes) are semiconductors that emit a bright light when current flows through them. This light can vary from infrared to color spectrum.

LED bulbs work similarly to a computer because they have a binary on/off state. They use electronic chips inserted at the bulb’s base. So, their technology is way advanced.

They come in various sizes and shapes. They don’t have a filament that will eventually burn out like ordinary bulbs.

Earlier LED bulbs were slow to light up, but current versions do so in seconds. LED bulbs are a new trend to make homes more sustainable while lowering utility bills. 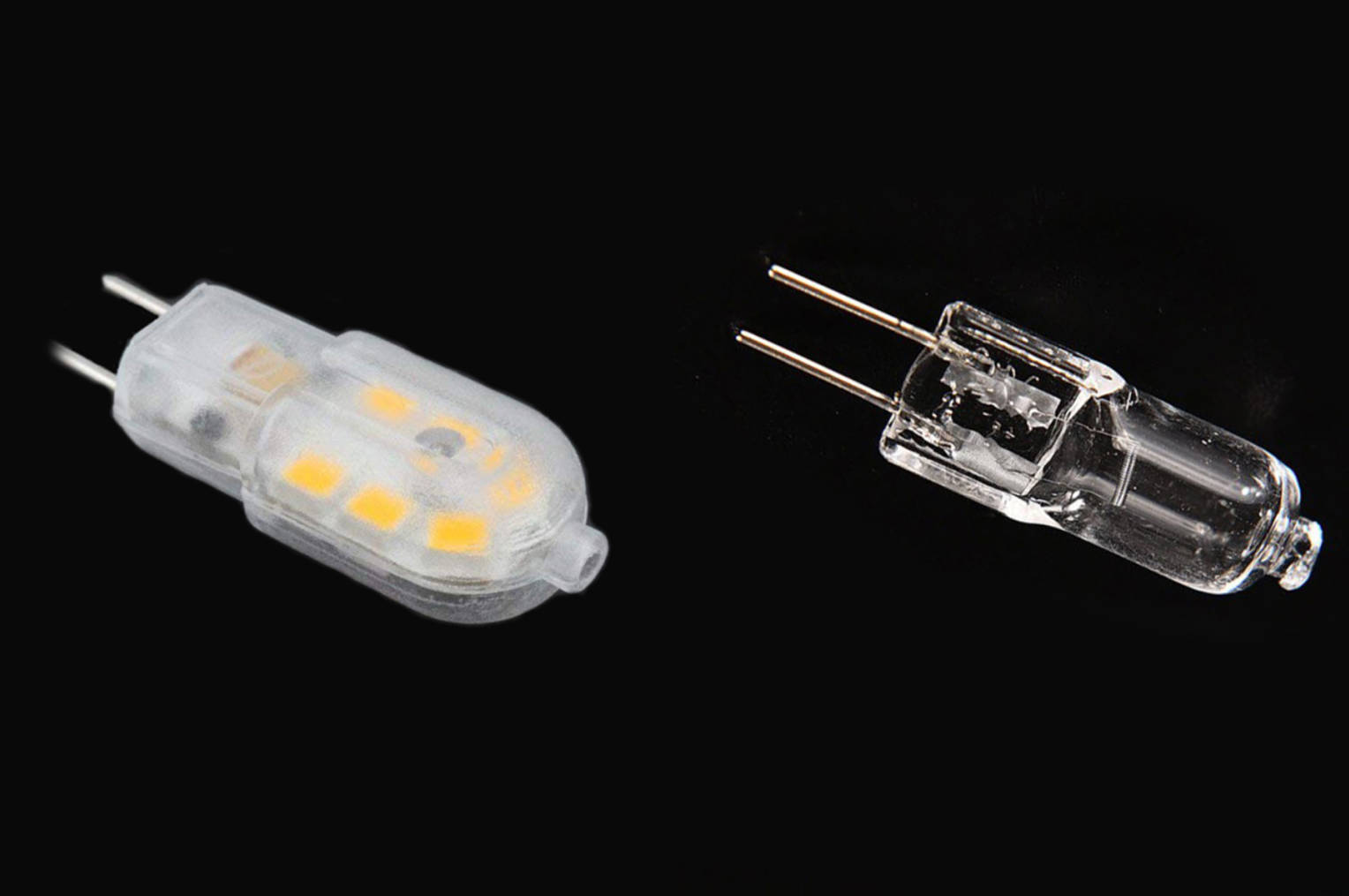 Regular lamps last from 750 to 100,000 hours, depending on their types. Other factors, including the brand and nature of use, affect their lifespan.

LEDs have a longer lifespan than halogen lamps. They outlast halogen lamps ten times more. Based on their longevity alone, LED bulbs are a better investment. They have better longevity paired with high efficacy.

The life expectancy of LED bulbs is up to 50,000 hours. Some can even last up to 100,000 hours. In contrast, halogen lights use more energy and last for around 1-4 years.

Efficacy refers to the ratio of light output to the energy consumed. It is stated in lumens per watt. Simply said, it measures how well a lamp creates light that the human eye can perceive.

The total lumens emitted by the light bulb are divided by the total fixture wattage to calculate this. It is expressed in percentage. 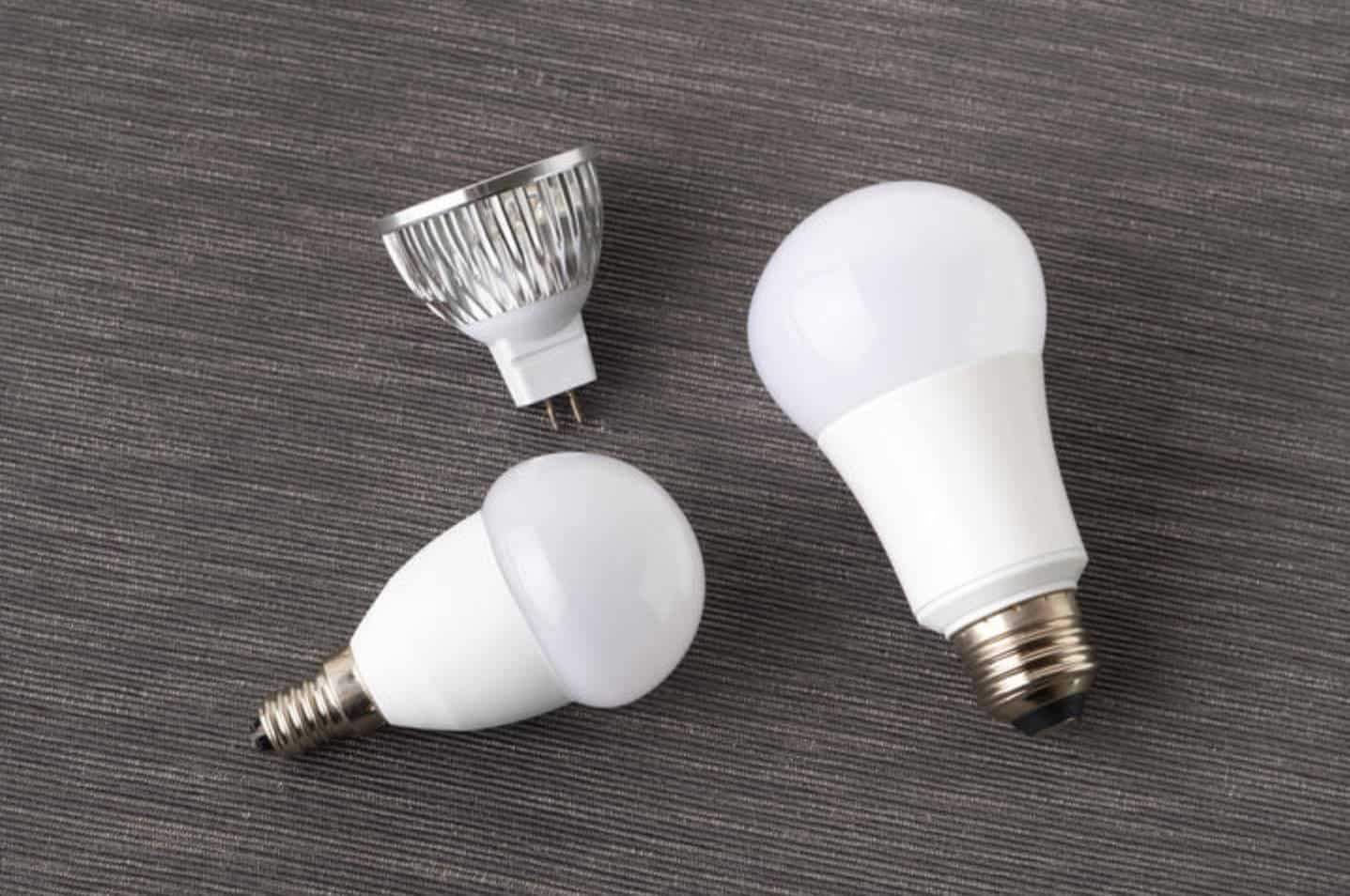 LED lights are more efficient than halogen lamps, consuming 85% less energy while producing the same amount of light. Thus, they remain cool to the touch. It’s less probable that you’ll set something on fire by mistake.

LED light bulbs produce lower temperatures. They do so by using their fins that allow heat to escape from the light bulb’s base.

On the other hand, halogen lamps convert 80% of their energy into heat. The remaining 20% only is used to produce light. So, they need more energy to produce the same level of light like LED lights.

Halogens become too hot within a few minutes of operation. This makes them more difficult to replace.

Halogens are also a fire hazard if they’re near flammable materials. These lights and their transformers generate a large amount of heat. They can cause dust, paper, and insulation batts to catch fire, especially if they aren’t installed properly.

The amount of light that a bulb produces varies. Lumens are a unit of measurement for the brightness of light bulbs.

The stronger the light is, the greater the lumen. The most effective way to determine a light bulb’s efficiency is to compare brightness to power.

Furthermore, LEDs attain full brightness instantly after being switched on. They are also unaffected by periodic cycles. They may be turned on/off for short durations, unlike halogens.

In the end, this means that an LED is not only brighter but also more reliable. It’s reasonable to say there is an obvious winner! 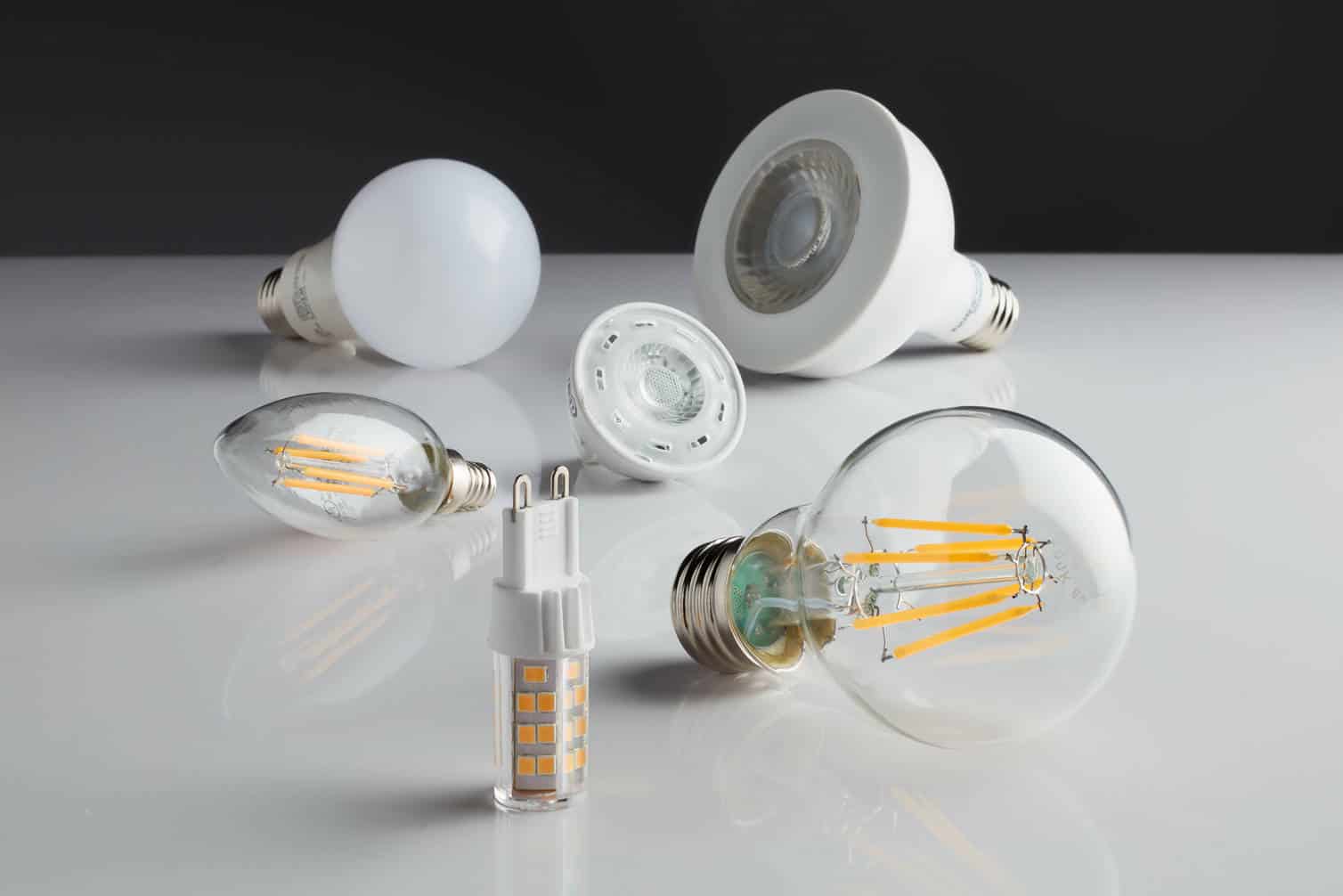 All halogen lamps are dimmable. A dimmer can easily change the luminance of halogen bulbs. However, dimming may shorten the life of your halogen lamp.

Once your halogen lamp is dimmed to 20%, the gases surrounding the filament begin to accumulate on the capsule glass. The bulb then switches to incandescent mode, causing the filament to burn out.

Contrarily, you cannot dim some LED bulbs. This functionality must be described explicitly in the product description. Also, check the dimmable logo on the packaging.

The Color Rendering Index (CRI) measures the unique characteristics of a light source. It indicates how a light source renders colors naturally compared to a known standard.

A 100-watt incandescent bulb is used to calculate the CRI. For domestic lighting, a CRI of 85 to 90 is considered adequate.

The CRI of halogen lamps is 100, the same as standardized daylight. However, LEDs aren’t as luminous as halogen bulbs. Most LED bulbs have a CRI of 80, but several premium LEDs can reach as high as 98.

Regarding color temperature, halogens are set at roughly 3000K. This is a warming yellowish shade similar to a 2700K incandescent light.

LEDs come in diverse color temperatures and brightnesses, so they’re far more adaptable than halogens. This means you can easily find a LED bulb that suits your needs.

They are available in 2000K for a warm white appearance, 4000K for neutral white lighting, and 6000K for a chilly bluish-white.

Bulb power measured in watts can also vary. As the wattage gets higher, the bulb needs more energy to produce light.

In contrast to halogen lights, LED lights are more expensive. However, with the improvement of LED technology, this price disparity is narrowing. With a substantially longer lifespan, you will regain the upfront cost of your LED lights.

Halogen lights have a shorter life period. So, they can no longer provide enough lighting over time. You’ll need frequent replacement and regular maintenance. This will give you bigger management expenses in the long run.

In addition, the heat coming from the fixture or ceiling can raise the space’s ambient temperature. If you put enough bulbs in a tiny place, the room will rapidly grow hot. You’ll have to spend more money on cooling to keep it in a comfortable setting.

Furthermore, as previously stated, halogen lamps have a short lifespan. You’ll have to replace them every few years, which will add to your problems and costs. 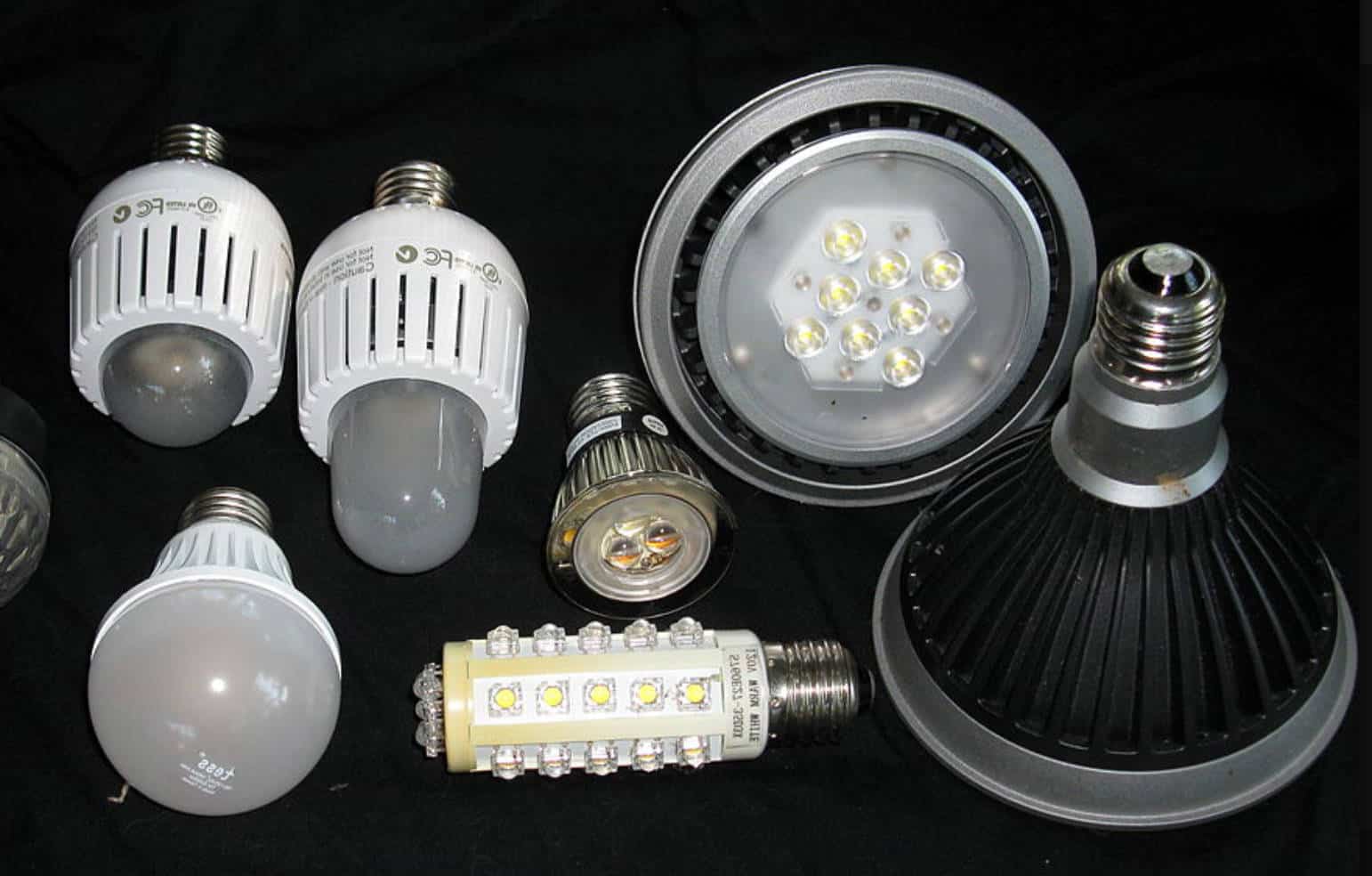 Currently, halogen lights have a limited range of applications. You can use them as spotlights or as background lighting.

They also look great in spaces requiring high colors, such as kitchen stripping, and art lighting. You can also install them for bathroom lighting and bedroom lights.

You can also use halogen lights in places where more heat is required. This is especially important on construction sites or house renovations. You can use them to make a space warm due to the extra heat they emit.

On the other hand, LED lights feature various color temperatures, making them ideal for accent lighting. Their light beam is usually between 8° and 360°.

LEDs offer the advantage of having adequate light for any occasion. You can create unique accent lights while still replicating the look and feel of a traditional light bulb.

Standard LEDs for household usage do not release UV rays in any harmful amounts. Some firms and studies claim that these discharges are nearly zero.

Special LEDs intended to emit UV light are the lone exception. However, this is not the case with the vast majority of LEDs. Before worrying about UV radiation, establish the areas where LED lighting is used and the goal it’s trying to attain.

The use of UV LEDs in sterilization, disinfection, and other technologies is considerably different from using LEDs in the home, classroom, or office.

In contrast, halogen bulbs emit more UV rays and less infrared radiation because they function at high temperatures. Therefore, they are equipped with specific casings and filters to avoid UV radiation.

For a long time, halogen lights were the standard for lighting homes and workplaces. However, bulbs have gotten more efficient with LEDs. LED technology has gotten more affordable in recent years.