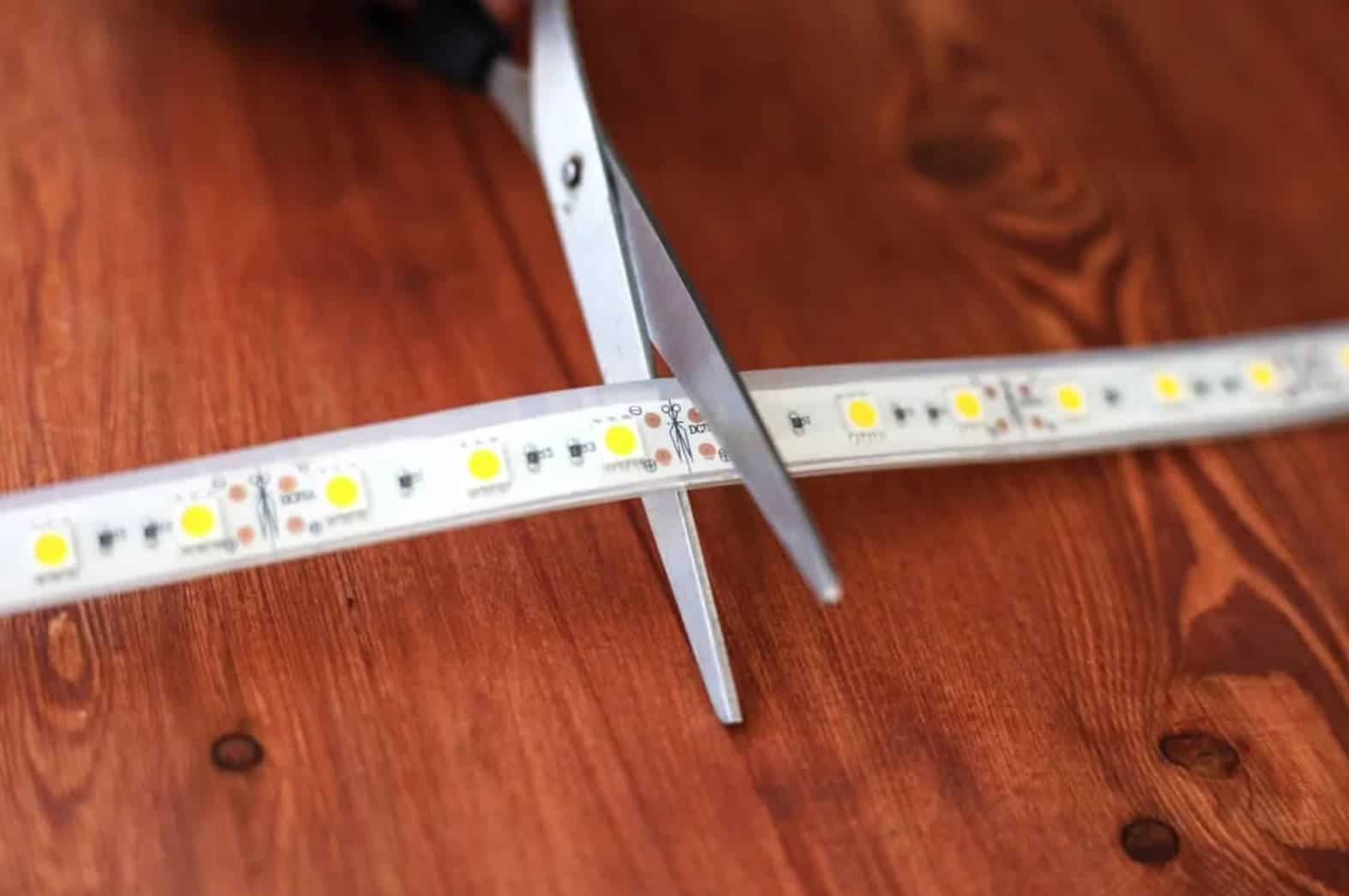 Strip lights are one of the simple but fun ways to go if you want to give a space or a room an upgrade. They’re easy to install, but they make a big difference. They can give any space a dreamy or party vibe with a push of a button.

Now, if you’re looking to style your LED strip lights or you found yourself with a little too many than you need, you might be asking a question right now.

How to cut LED strip lights? Well, allow us to help you with that. Let’s cut to the chase and get to cutting these lights!

Can You Cut LED Strip Lights? 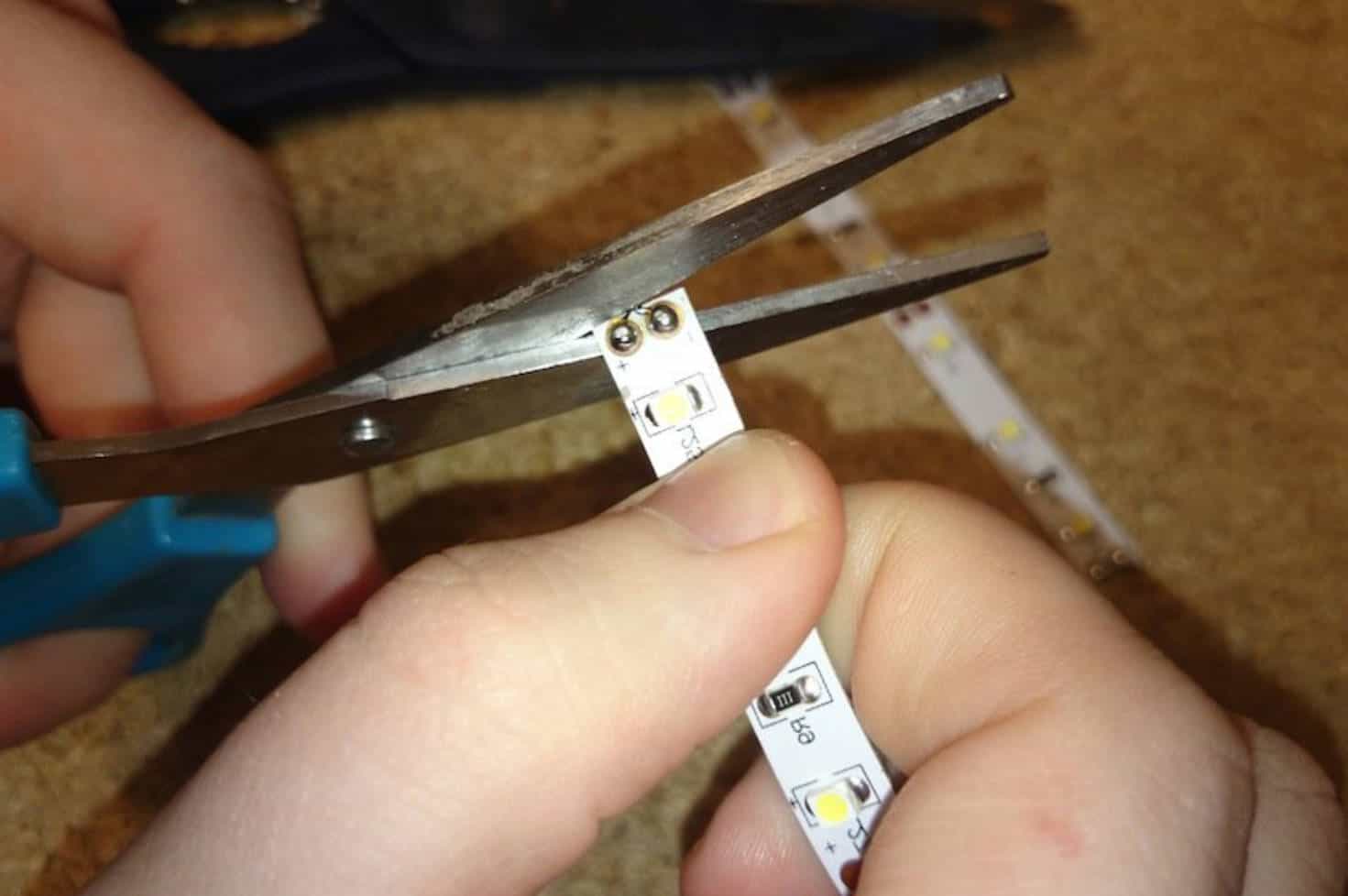 Before we continue, let’s address the elephant in the room. Can you cut LED strip lights in the first place? Not all LED lights render themselves cuttable, but you can cut many of them.

This feature or characteristic is not only limited to these lights. You can also trim down string lights if you wish to do so, only it might be a little more challenging to make them work afterward.

Now, these lights are easier to cut and still make work afterward than other similar-looking lights because, unlike the others, strip lights are made up of several independent circuits.

In other words, you won’t be ruining the entire system when you cut an LED strip light. That is if you cut in the right place. What is the right place, you ask? More on that in the next portion.

We’ve got that out of the way. Now, let’s go ahead and discuss how you can cut your LED lights.

How to Cut LED Strip Lights?

As we’ve said above, cutting an this light is easy. We’re not kidding! You might be surprised at how doable it is. 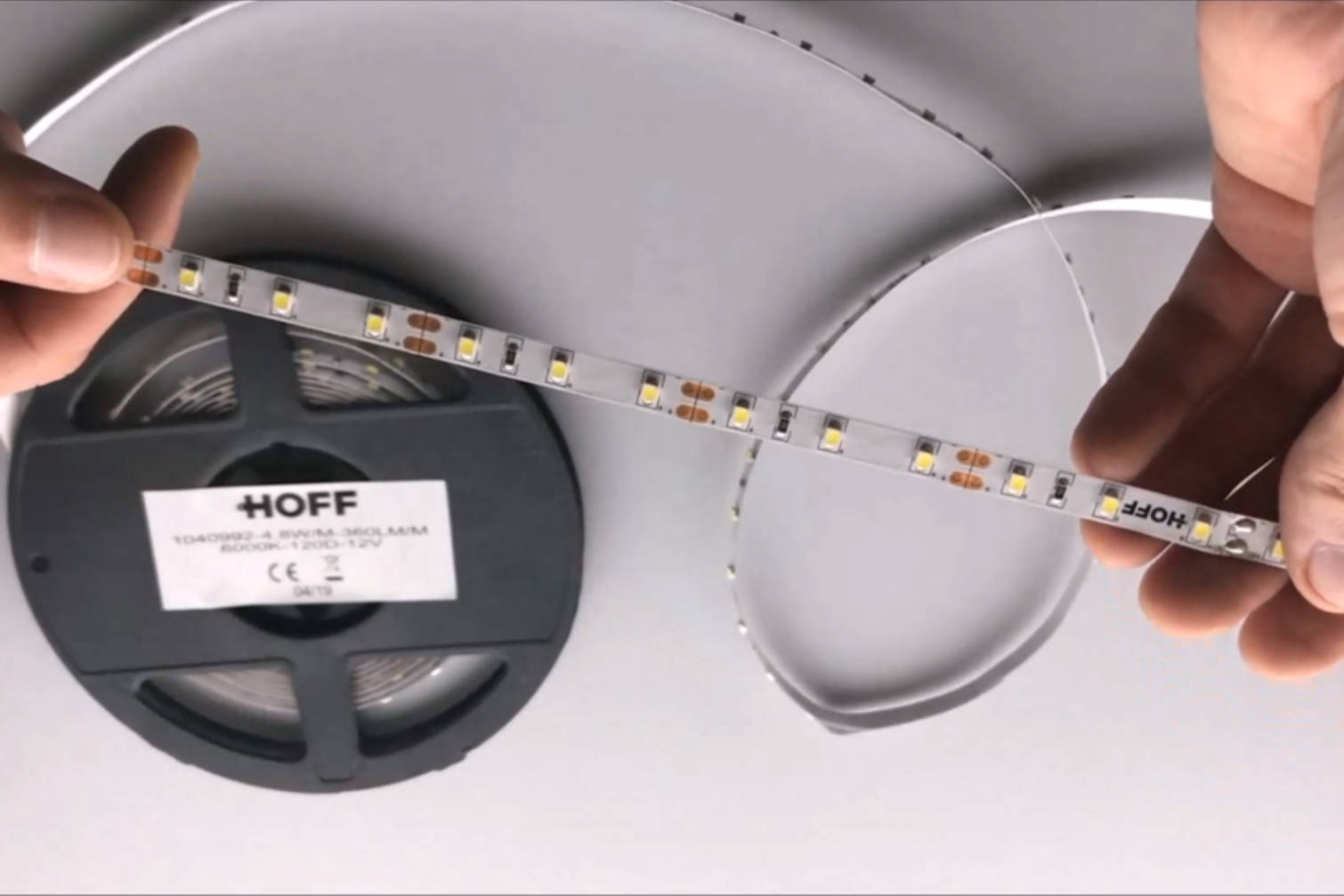 First, you want to check if you could cut your LED lights. You can cut many strip lights, but not all of them render themselves cuttable.

Second, you might also want to consider if you want to. While some types are cuttable, you can’t simply cut them. Take waterproof LED strip lights, for example.

Cutting them into portions could make their ends lose the seal that makes them waterproof. If you cut this LED light, you would most likely have to reseal it if you need the waterproof feature.

Finally, you want to check if your LED lights are working. Unroll your lights, plug them into an outlet, and let them stay on for a few minutes. Warranties are often void once you make your first cut, so don’t forget this step.

Step 2: Choosing and Preparing the Tools 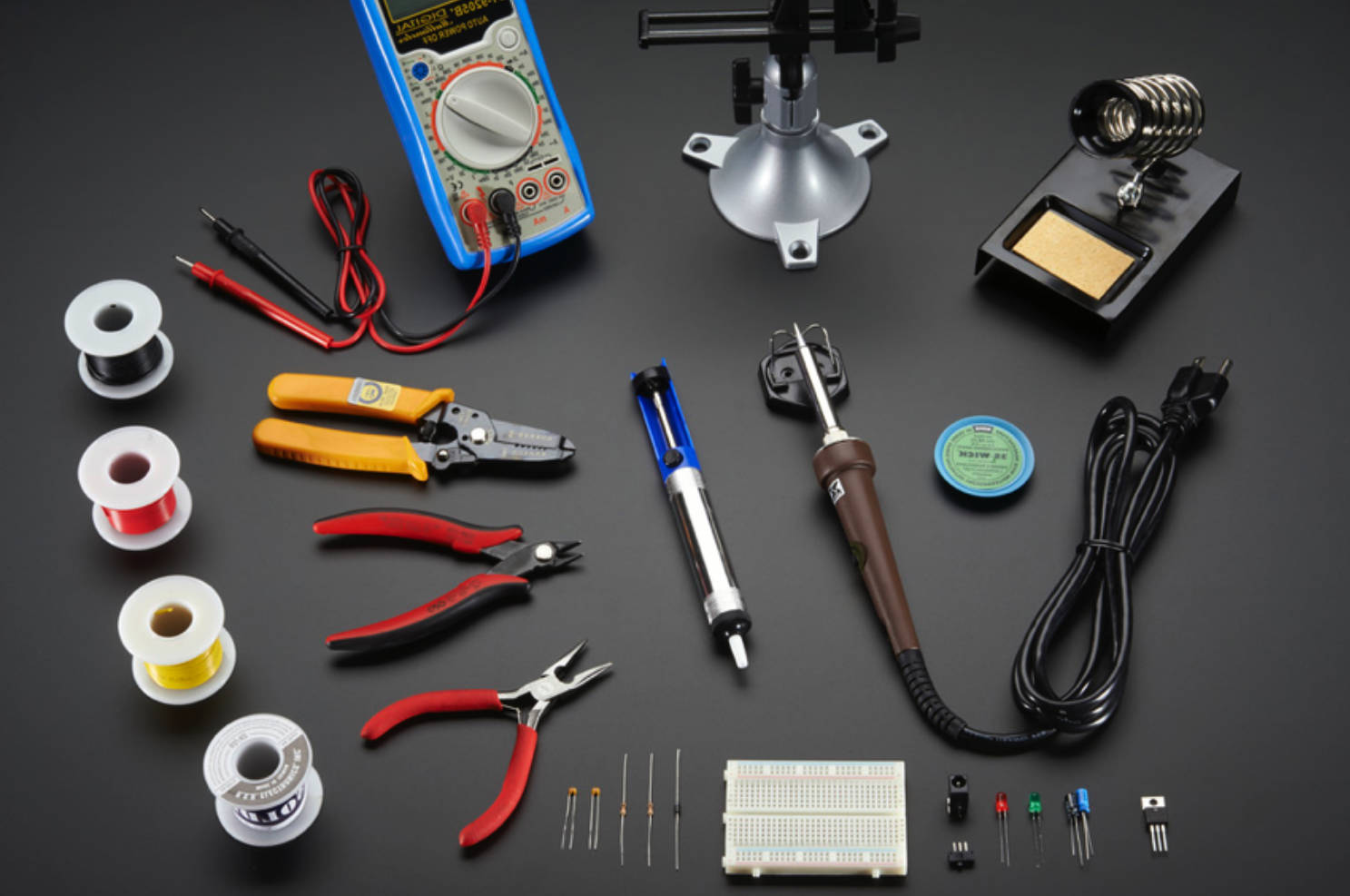 Next, you want to choose and prepare your tools. Scissors are often the choice, but you can also use a knife or a wire stripper. Whichever one you choose, make sure it’s sharp!

Additionally, you might also need a measuring instrument and a screwdriver.

Ideally, you’ll be measuring where you’ll put the LED lights and the lights themselves, hence the measuring tool. You could eyeball how long the strip you need is, but that might prove to give you more work if it turns out the piece you’ve cut is too short.

The screwdriver will come in handy for later. More on that in a bit.

Once you’ve decided where you want to put your LED lights and you’ve measured them, it’s time to get on with the task. However, don’t cut just yet! 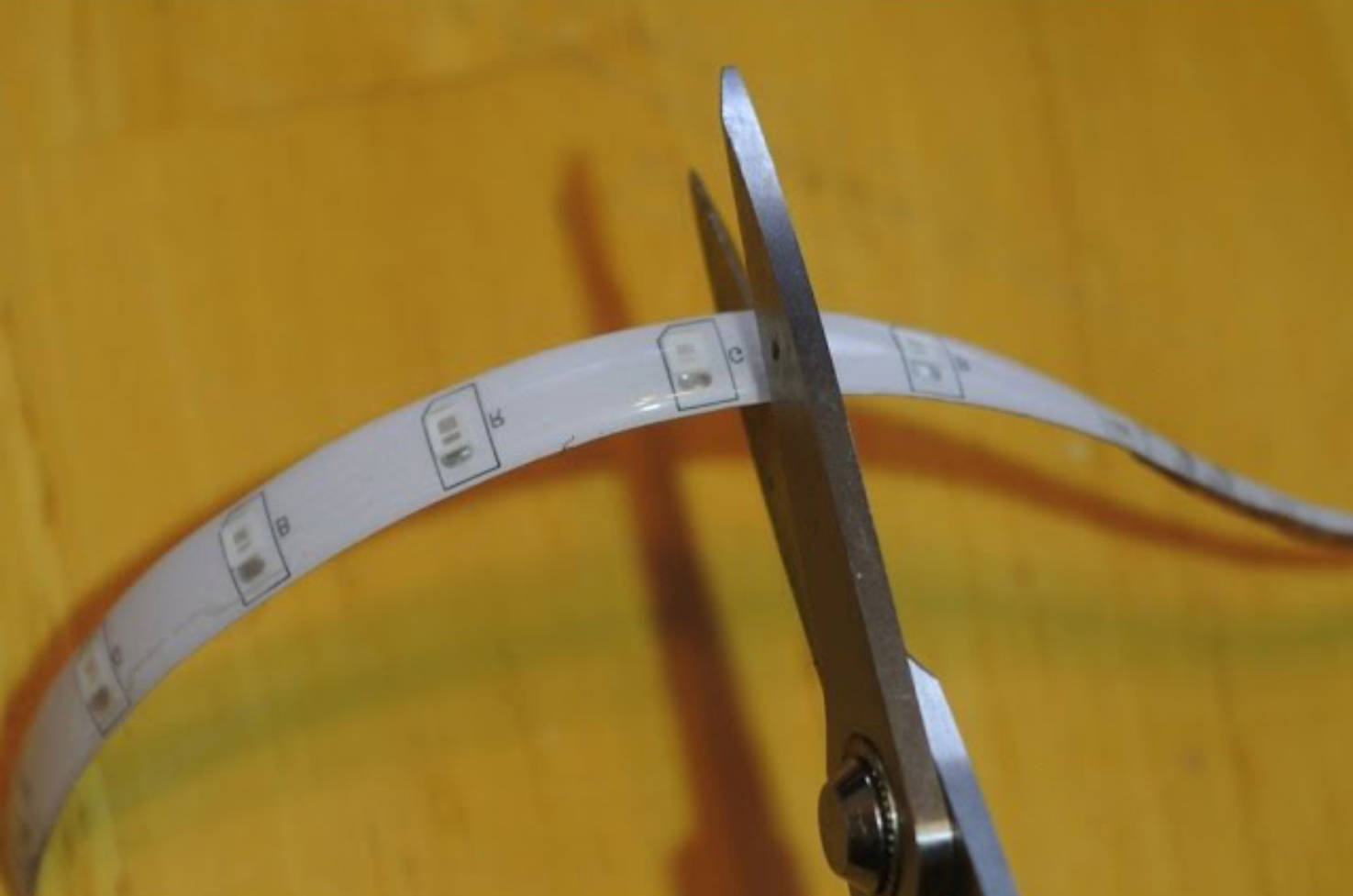 Once you’ve located the copper dots, use your scissors to make a clean cut. Some LED strip lights even provide a clear line that you can follow. Also, you don’t have to worry. You don’t have to wear any safety gloves for this step. You won’t be shocked.

You don’t have to worry if you’ve cut in the wrong place. You don’t have to throw the whole roll away. There’s a way to fix it. All you have to do is locate the next nearest copper dots. Try your best to make a clear cut now.

However, if you’ve lost a circuit, you would most likely have a shorter strip than you need. Don’t cut another strip just yet! Let’s reconnect your strips instead.

These lights are very flexible. You can cut them, but it doesn’t end there. You can also put them back together.

There are several ways to do this.

First, you can use some solderless connectors. They are probably the easiest way to go. Use a blade or something similar to cut off the plastic parts of the strip lights you wish to reconnect to reveal the circuit.

On the other hand, you can also solder two ends together. Again, you want to cut off the plastic parts and locate the copper dots. This time you’re going to use it as a guide where you should solder. 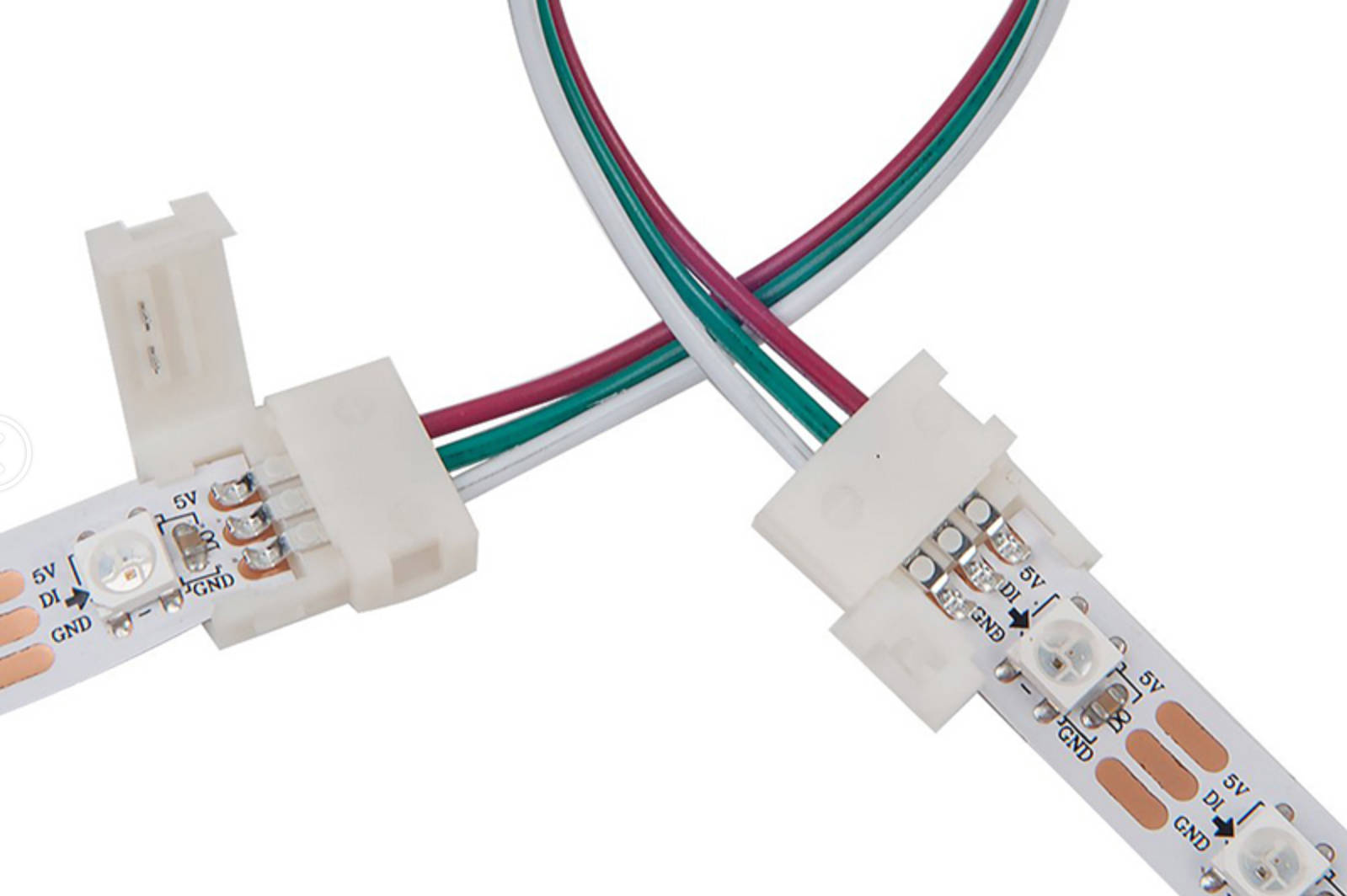 Steps 5 and 6 are optional. However, if you’ve cut the LED strip lights, you would most likely have to make a new end. This step is not that different from step 6.

First, you can use a connector. There are many different types of connectors, and there are several ways to do this. We’ll show you one that could help you with whatever common method you choose to do this step.

Assuming you’ve opted for solderless clamps and some low voltage wires, this is how you’ll do it.

First, you want to put the LED strip light on one side. With some connectors, this step could end here. However, if you’re dealing with wires, continue on.

Second, you want to get your wires and peel the two ends. You only need to peel a bit, just enough to rearrange them on the terminals or circuits. Also, don’t forget to strip one end a bit so it could make a connection with the terminals.

One by one, insert the wires to the right terminal and tighten their connection by tightening the screws. Don’t forget to arrange both ends of the wire to the proper slot!

Now, whatever connector you choose, this 3-step guide should be able to help you. However, that is only the first option to do this step.

Second, you can also solder. You might have to peel and strip your wires again. Again, make sure you match the correct wire to the right slot.

Whether you reconnected two strips or you made a new end, you might want to consider protecting that new connection with a heat shrink cover.

Additionally, we also mentioned resealing your waterproof LED light earlier. Here’s how you can do just that:

Other Things to Consider

You now know how to cut, reconnect, and make a new end for your LED lights. However, allow us to share a few more tips before letting you go.

As we’ve mentioned above, there are different materials you can use to make things easier. If you’re not good with wires, you might want to take a good look at your options. Depending on what you choose, certain steps could be easier or a little more challenging.

Put Some Pressure in There

You might be able to use a pair of scissors to cut your LED lights. However, don’t expect that it will be as easy as cutting through paper! You would have to put some pressure in there.

Also, since it’ll be a little tough, you might want to go slowly at it. Remember, a clean cut is a must for this light to still work after cutting them!

First, we discussed if it is possible in the first place. After that, we’ve shown you how to cut your strip lights down to the measurement you need. We also talked about how you can reconnect these lights back together. Finally, we also discussed how to make a new end.

We hope we were able to help you with this concern. If you need any more help with your LED strip lights or any LED light at that, then feel free to check out our other discussions!