Are you wondering how to install LED strip lights around corners? Well, don’t fret! Allow us to help.

An LED strip light will look like one of the easiest things to install until you reach a corner. However, you don’t have to abandon your rainbow-colored dream of having a rainbow-colored room!

We prepared 3 methods to show you today. If you’re ready, let’s get to know your options!

Corners got you scratching your head? Don’t worry. With these three options, you’ll have your LED lights running in a jiffy. 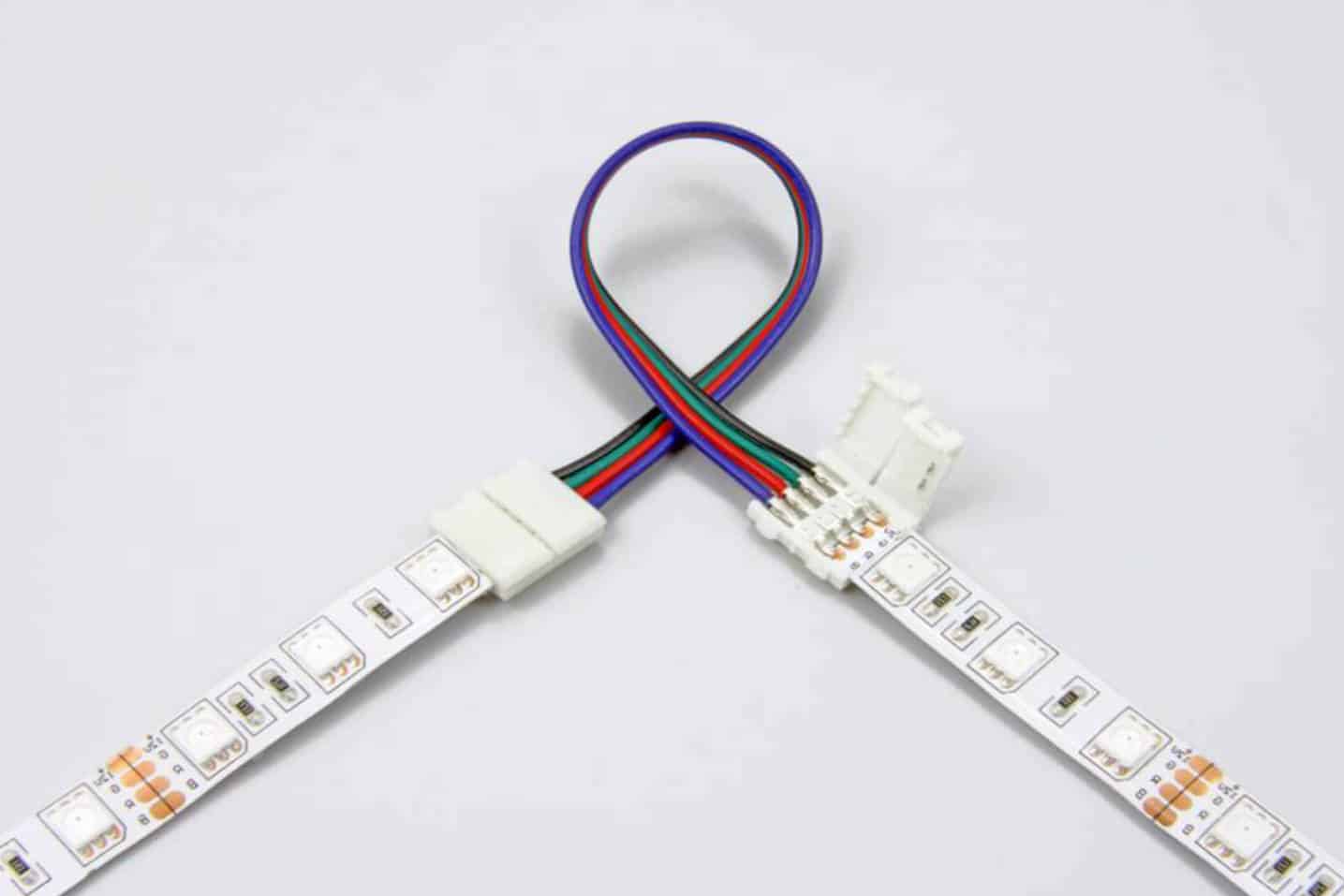 The first method would require you to get and use connectors and maybe even clips. It is not the easiest method, but it is the safest way to go about your corners. Additionally, it is also one of the most aesthetic ways to go if your LED lights are placed where they are visible.

First, you’ll have to measure where you plan to set up your lights. You’d want to leave some room for the connector you’ve chosen.

After that, you’ll have to measure your LED lights as well and make a cut. Don’t forget to look for the copper dots! Remember, you can’t just cut anywhere on your LED strip lights. Additionally, make sure you make a clean cut. If not, you might ruin the circuit of your lights.

Next, connect your lights to your connectors. Make sure you put the right pieces on the right slots!

If one side of your LED lights is not lighting up after the installation, it could be that you made a bad cut or that you didn’t line up the polarities correctly.

Things to Keep in Mind with Using Connectors and Clips 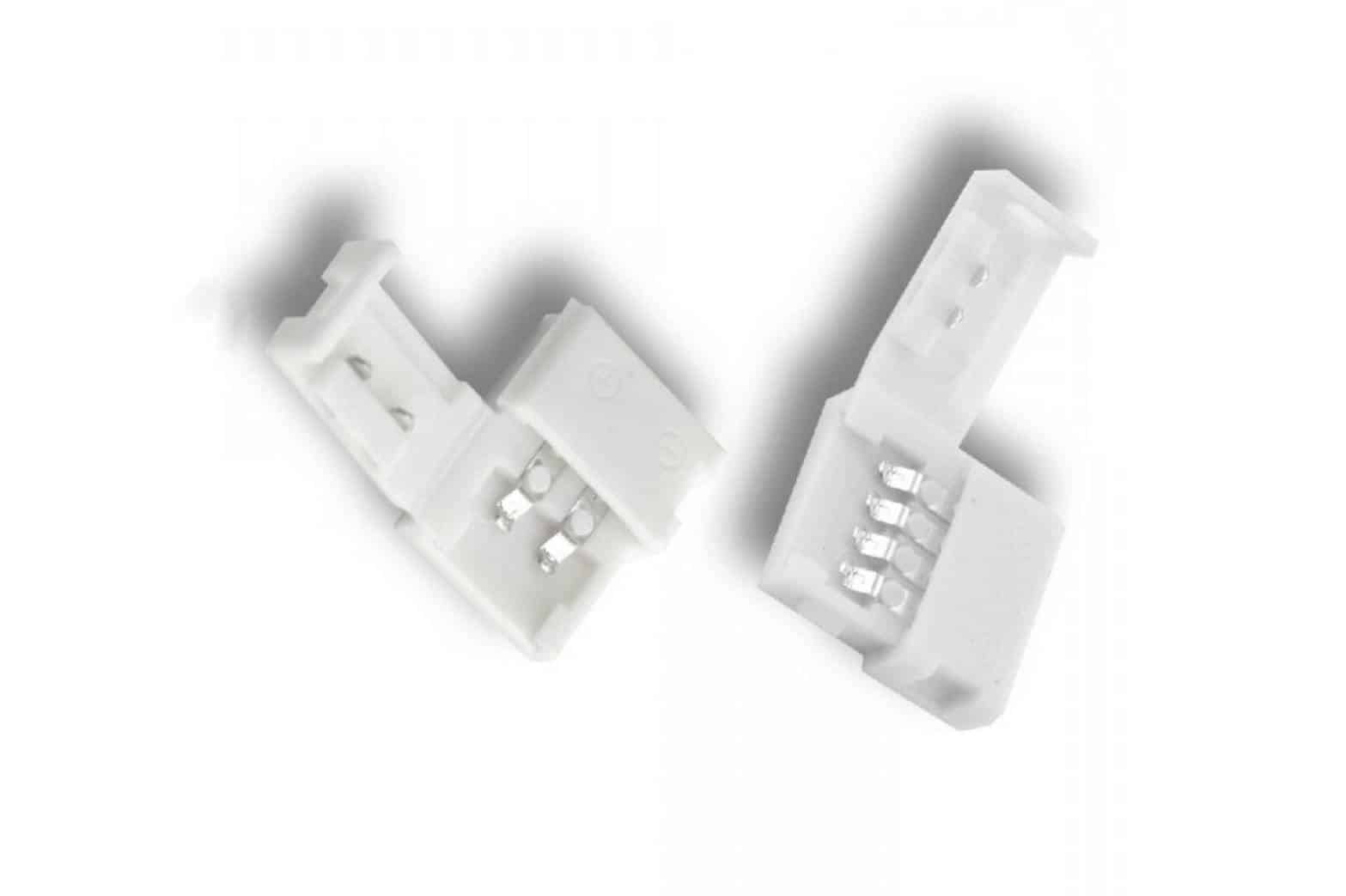 As we’ve said earlier, there are many different kinds of clips and connectors. However, they’re usually not universal. Make sure you get one that matches the LED strip lights you have.

Additionally, some LED strip lights’ warranty becomes void once you cut them. With that, you might want to try out and make sure your LED strip lights are working before continuing with this project. Don’t forget to unroll the entire thing before trying them out!

To add, if this is the first time you’re installing LED strip lights, you might have accidentally made a bad cut, as we’ve mentioned above. Now, if that is the case, you don’t have to worry.

You don’t have to throw the whole roll away. Find the next nearest copper dots and cut. It should be okay now. However, your strip might now be shorter than what you need.

You don’t have to cut a new strip. Clips and connectors could also help you in this area. Connect your strip to the rest of the roll using gapless connectors and make a new cut. 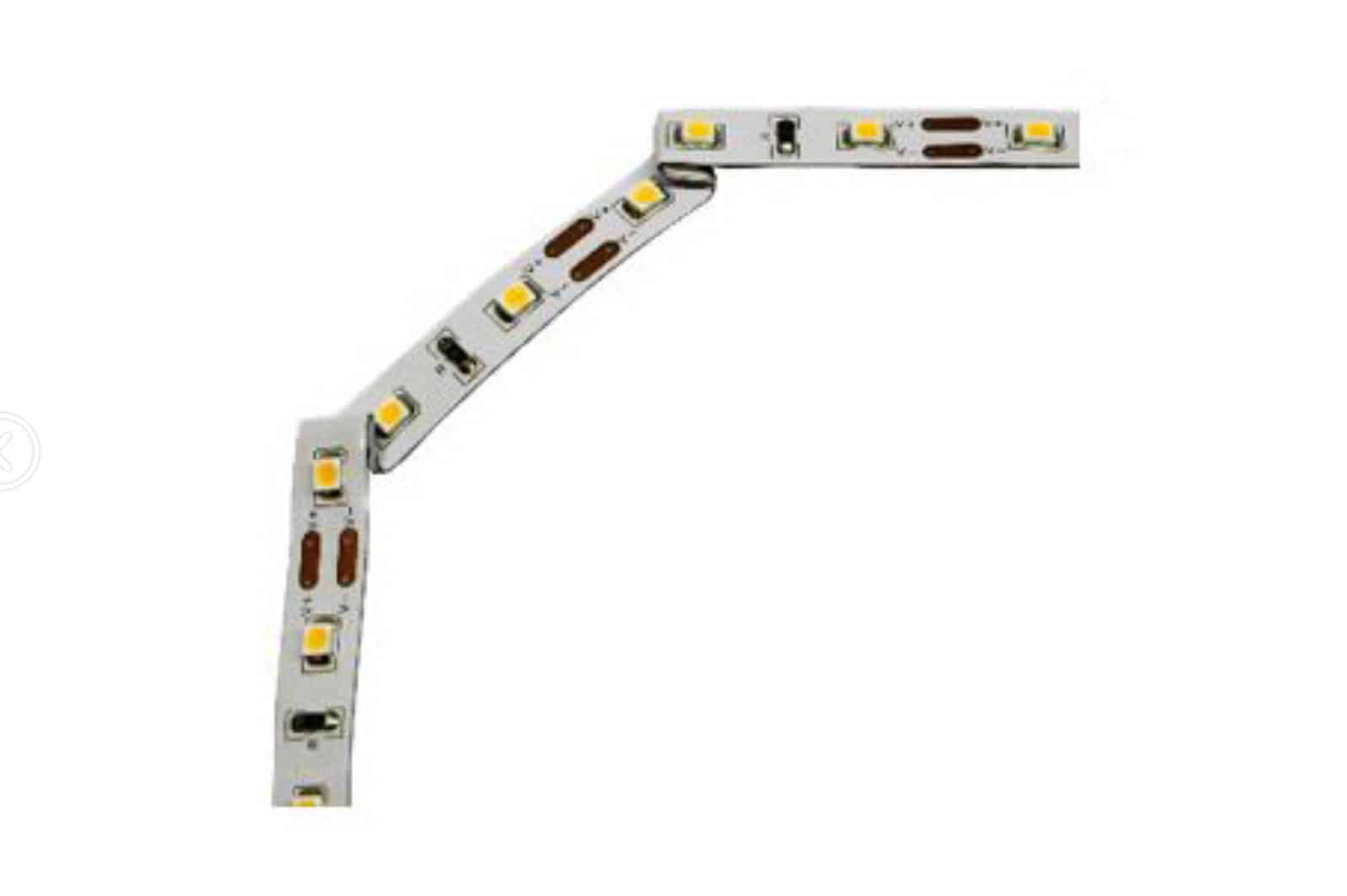 Here, we have what is most probably the second best-known method of dealing with corners and LED lights.

This one might sound a little tricky, but it is easier than our first method.

First, again, you want to measure where you’re placing your lights, as well as your LED lights. Depending on the number of corners you have to deal with, you might want to add a few inches to your strip lights as the folds could eat some inches.

Once you’ve located where you’re going to make the folds, you want to lay those parts flat on a surface.

Next, fold the strip at a 45° angle. Note that the fold should be in the direction opposite where the corner is. After that, fold the strip back on itself towards the right direction you need it to be. Finally, you want to press on the intersection.

As you might expect, the intersection might still not stay in place after you firmly press on it. You don’t have to worry, though. Once you’re ready to put up your LED lights, the adhesive at the back should be enough to keep it in place.

When bending and folding your LED strip lights, you want to make sure you won’t be hitting any important parts while doing so.

Some don’t approve of this method as it poses the risk of damaging the LED strip lights. If you want to go for this method, you might want to make sure you have some quality and durable LED lights on your hands.

Things to Keep in Mind with Folding the LED Strip Lights

If you’re dealing with some thick LED strip lights, then you might find that your intersections might not be staying in place even after you’ve taken off the adhesive. In that case, you can use some sticky glue. Screw-on supports might also be of help. 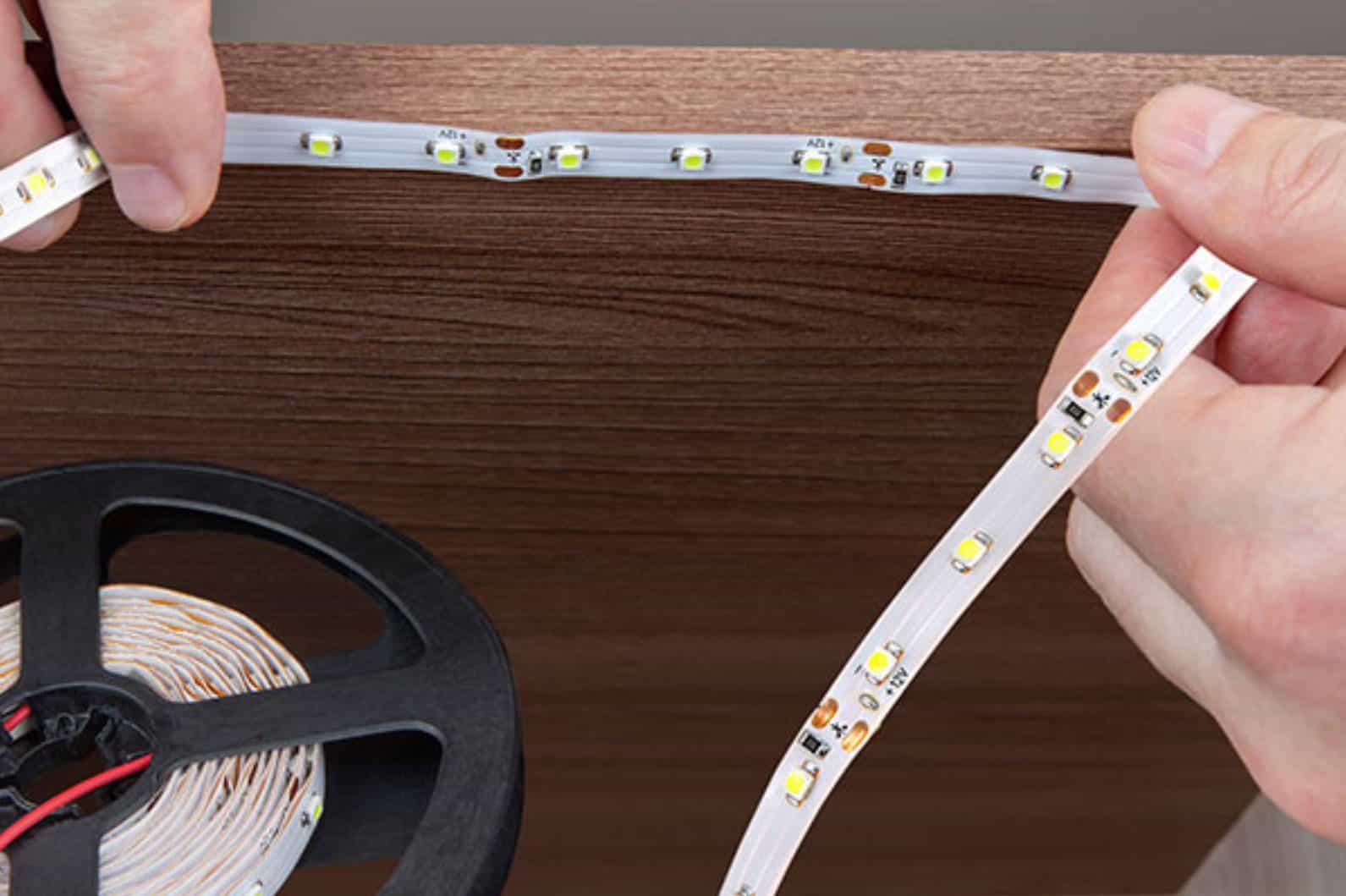 This third method is probably the easiest on the list. However, as you might have already heard, it’s not the most advisable method in more ways than one.

Once you’ve located where you need to make your corners, you want to contort your LED lights as if you’ve made a pinch on the part you plan to place on the corner.

You still want to make sure you won’t be hitting any important parts while doing this method. Now, let’s talk about why some do not favor this method.

For one, it could ruin your LED lights. Even if you avoid the resistors, diodes, and such of your LED strip lights while doing the pinch, the action might still cause some damage. Not unlike the method we discussed above.

Additionally, you might only want to go for this method if your LED lights won’t be placed somewhere visible. As its corners would be sticking out, it doesn’t help much with the aesthetics.

Lastly, the LED lights won’t lay flat on a surface if you go with this method. There would be parts that are sticking up, as you already know. With that, you could expect your strips to fall sooner rather than later.

Things to Keep in Mind with Pinching the LED Strip Lights 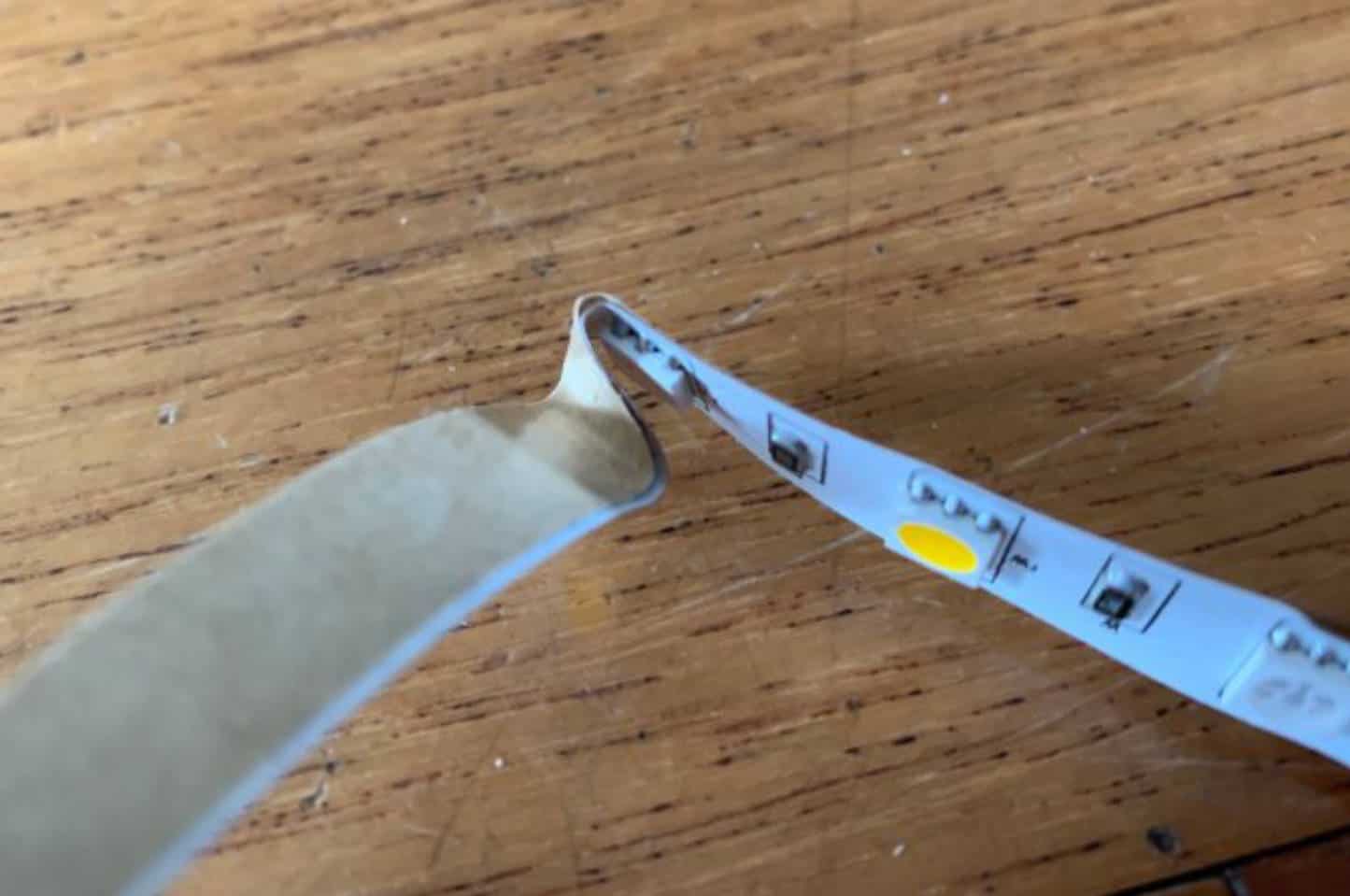 You might have to be creative if your lights will be placed somewhere visible, and you want to go for this method.

If you’re thinking of going with this method, but you don’t like the corners sticking out, you can try using some screw-on support or similar clamps.

However, you might want to keep the thickness of your LED strip lights in mind when getting the brackets, as you might get ones that could not accommodate your light’s thickness.

Still, it would be good to remember that even if you would be able to lay down the corners so that it’s not sticking out, the result might still not be that aesthetically pleasing.

Also, in your endeavor to tame the corners that are sticking out, it might be a good idea to remember to prioritize efficiency than aesthetics. If you insist on laying the corners flat, you might damage some parts.

Which Method to Go For 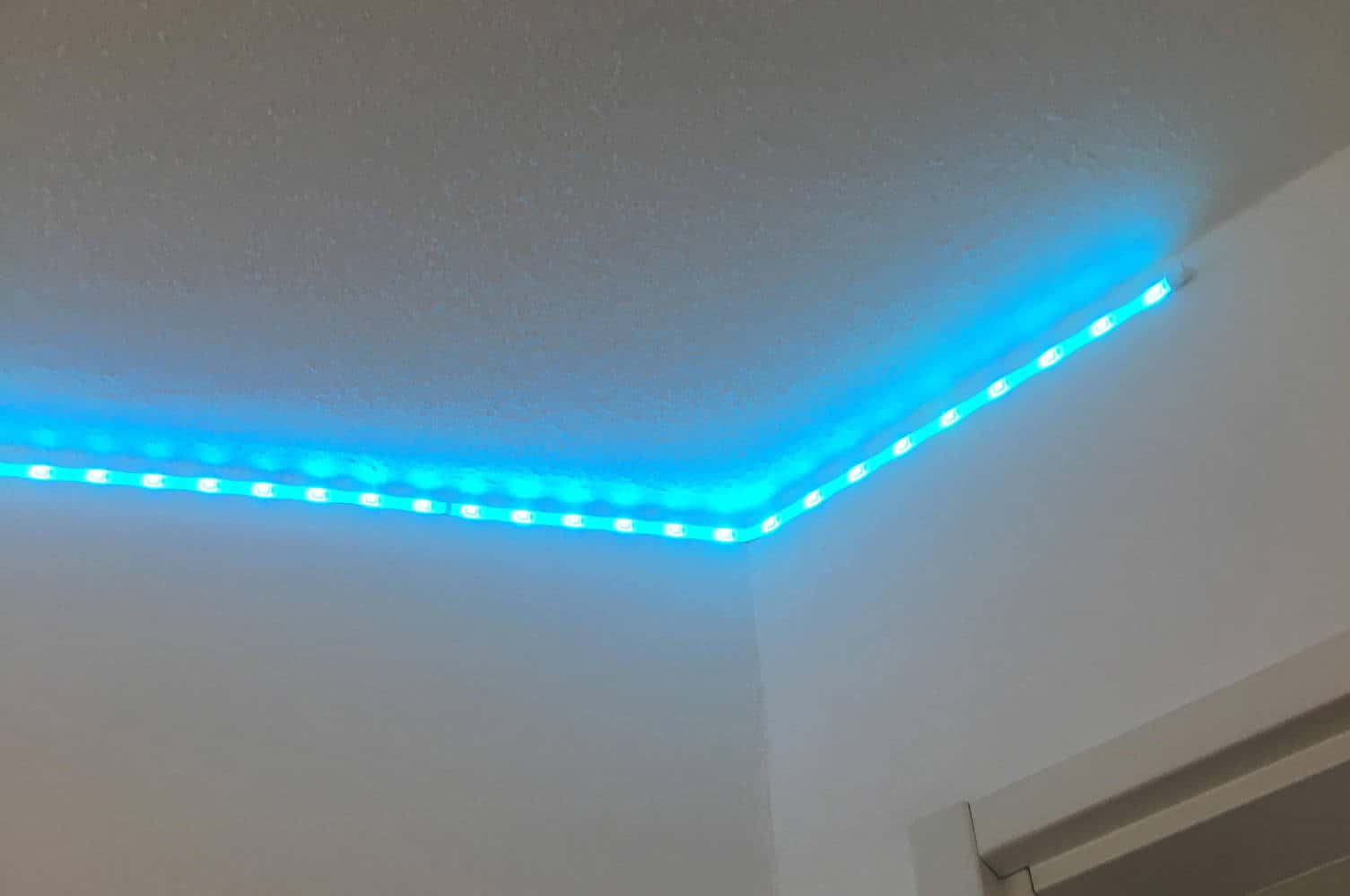 Using connectors and clips might be the safest way. However, it is also the one with the most steps. On the other hand, pinching and folding might be easier, but you’ve probably heard many suggest against these methods.

Now, you might like to save some time and effort, but you’re worried about damaging your strip lights by taking the easy route. So, what is the best method to do?

Most LED strip lights render themselves cuttable. However, not all strip lights are. That said, if you happen to get your hands on strip lights that you can’t snip, you can’t use the connector and clip method.

On the other hand, if your strip lights are thick, you most likely won’t be able to bend them. Additionally, the LED lights might easily give out, as well, if they are of poor quality.

Keeping these things in mind, you can go with the method you wish to follow as long as your LED lights allow you to do so.

If you ever find yourself in another dead end or corner with your LED lights, feel free to check out our other discussions. Who knows? We might have the bright idea you need!