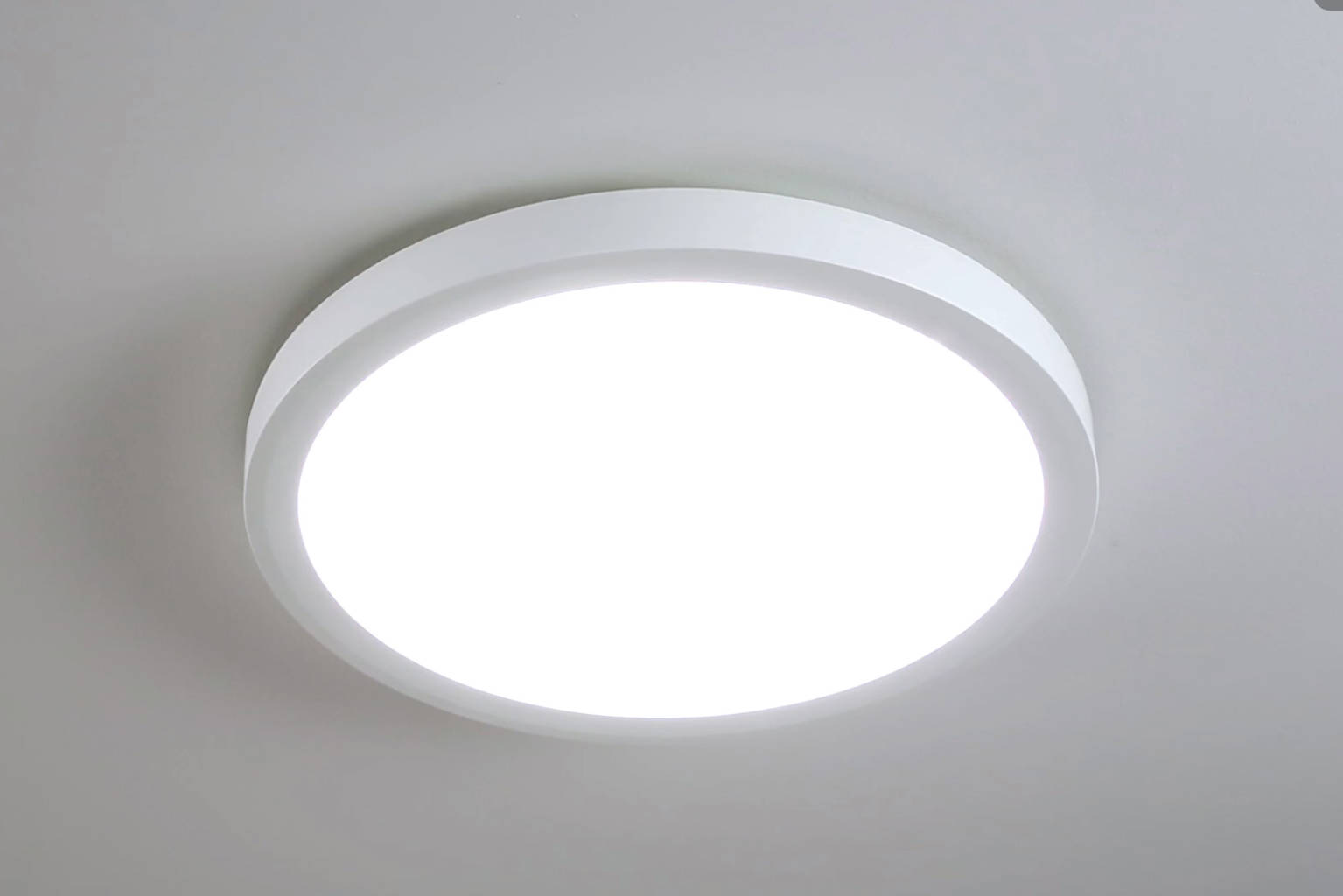 Maybe your old LED ceiling lights have given out, and now, you’re pondering if you could take on the job of replacing it. Well, you might be happy to know that you could!

You might not have to call someone to change your LED ceiling lights after spending a few minutes here with us. With these five easy steps, you might find out you’re actually a pro at this!

How to Replace LED Ceiling Lights?

Let’s get to business! Let’s start tackling these steps one by one. By the end of this guide, you might be surprised at how easy it could be.

We’re not kidding or exaggerating. Don’t believe us? Well, you can check it out for yourself! Let’s change your ceiling lights in five easy steps!

Step 1: Getting to Know Your Ceiling Light 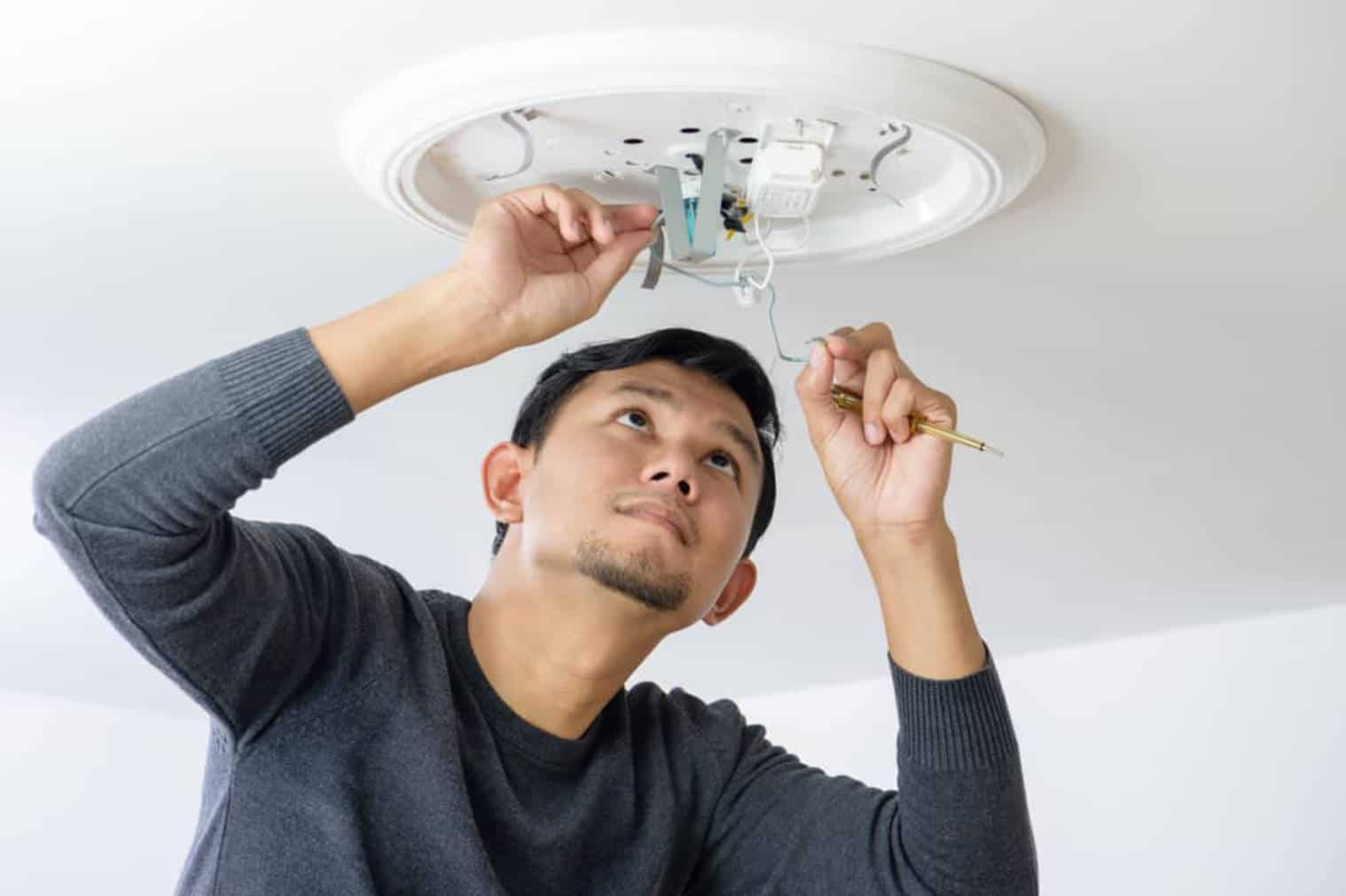 Don’t forget to turn off the circuit breaker and the light switch. Also, it is advisable to wear some safety glasses and maybe even a surgical mask.

You’re going to be working overhead and probably above the ground. Proper hand and eye coordination are ideal. Also, of course, it’s always a good idea to protect your eyes.

Additionally, you might want to wear a surgical mask. Let’s face it, ceiling lights are often not thoroughly cleaned, making it a good spot for specks of dust to gather. We think you don’t want to be sneezing and sneezing on a ladder.

However, if you might have noticed, we refrained from mentioning wearing some gloves. You’ll have to take off the cover of your ceiling light. Usually, covers are made of glass.

Having gloves on your hand while taking it off might prove to be more challenging. Having your bare hands would give you a better grip when taking it off.

Once you’ve switched off the power supply and taken the cover off, you’d want to take note of the specifics of your LED ceiling light.

Step 2: Getting the Replacement 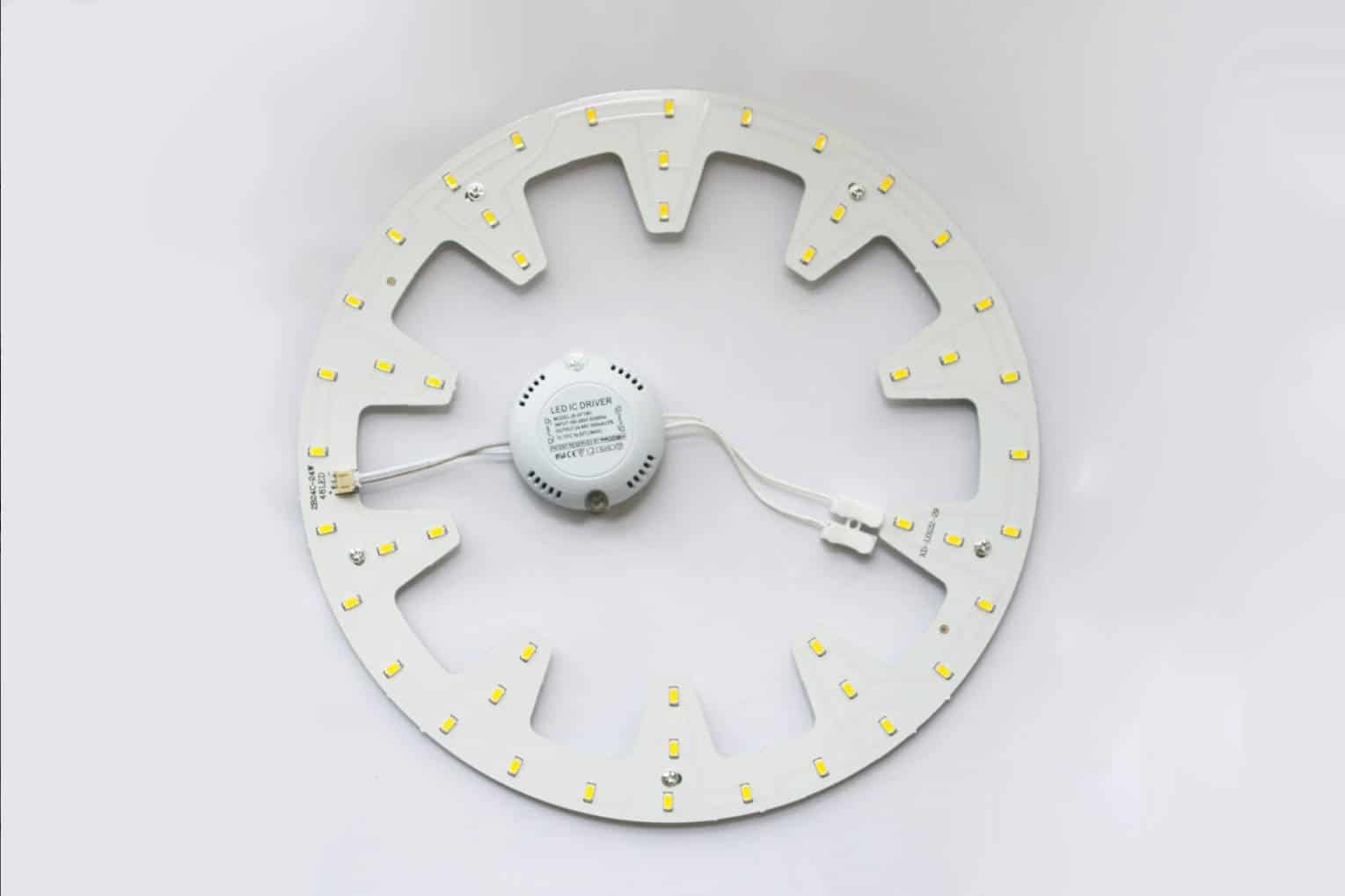 Once you have the details you need, it’s time to take a trip to the hardware. Now, it could be all so overwhelming.

There are literally hundreds and hundreds of choices. However, you might want to consider the Brite LED Ceiling Light Source. It seems to be one of the crowd favorites.

If you’re still unsure what you should get, don’t be afraid to ask for help from people at the hardware.

Step 3: Assembling Everything on the LED Plate

Before we continue, it might be the best time to note that, from here on, we’ll be focusing on how to install the Brite LED Ceiling Light Source. However, you don’t have to worry. We’ll address recessed and mount LED lights later on, as well.

Once you have your new LED ceiling light, it’s time to install it.

Before getting on that ladder, you might want to assemble everything on the LED plate first. Get everything out of the box and make sure you have everything. You should have these parts:

You can’t miss anything, even a screw! However, you can afford to miss a screw or two if you’re replacing an old LED ceiling light with the same model.

It might even be a good idea to keep those screws and magnets instead of throwing them away in case something like this happens.

Attach the screws and magnet on the LED plate and driver. Don’t forget to attach the LED driver to the LED plate, as well. You won’t need a screwdriver for this step, but don’t put it away just yet.

You’ll be needing it for the next step. However, you can simply use your hands for this step. Make sure you tighten those screws, though! The LED plate and driver might collapse and fall otherwise. That would not only mean more work, but it could also be dangerous!

Once everything is in place, do some inspection. If you’re happy with how things look, you can start placing everything on your ceiling. 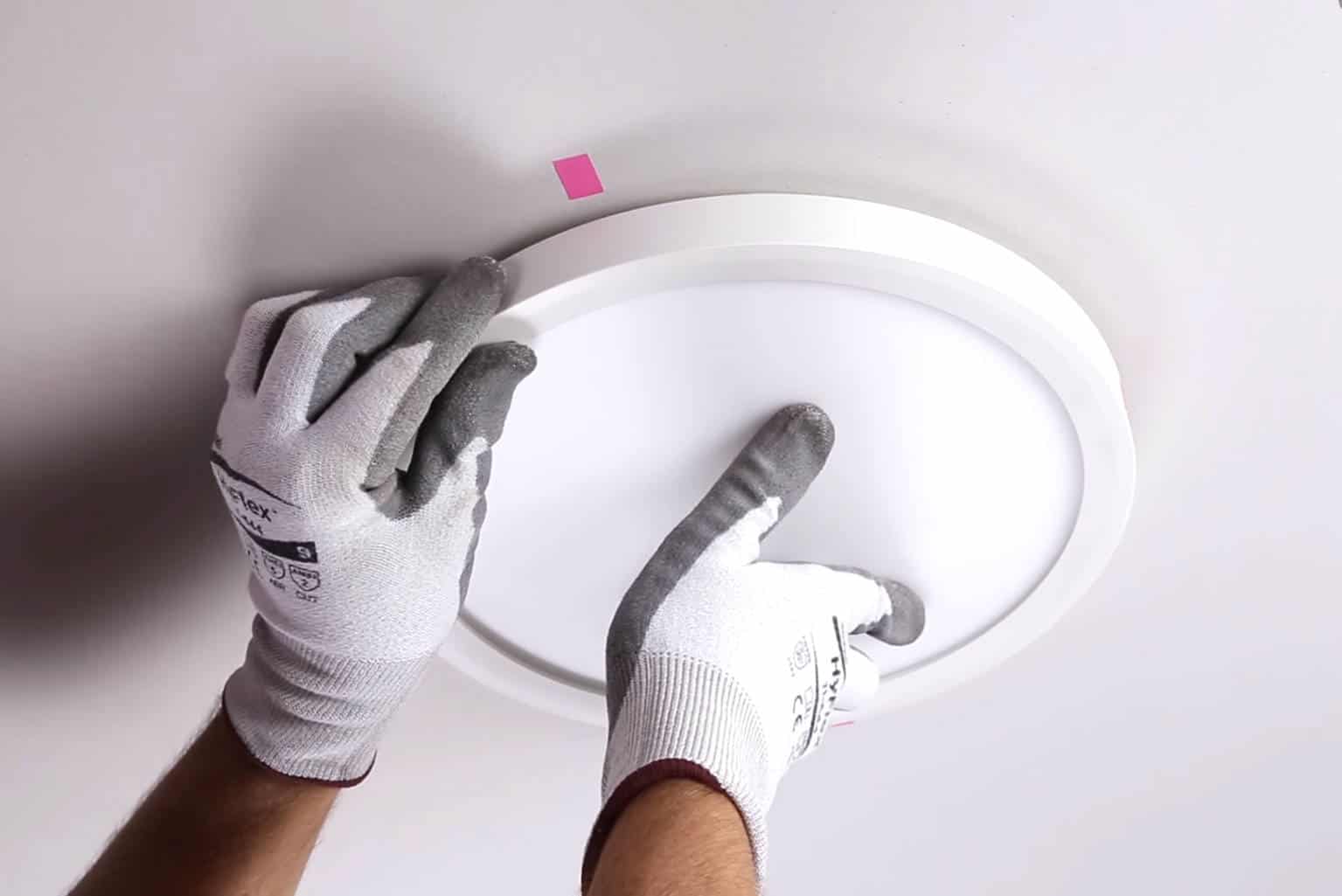 Again, you want to turn off the power supply and the switch before starting.

This step might take you some time on your first try, so it might be a good idea to do it when everyone’s out and about. Also, don’t forget to inform everybody to ensure that no one would turn the power back on by accident.

It wouldn’t hurt to leave a note on the circuit breaker for extra measure. Once you’ve ensured your safety, it’s time to put that ceiling light up. Again, since it might take you some time on your first try, you might want to start early, so you’ll have the aid of sunlight.

Stick the LED plate and driver to the base. You want the driver to be on the upper portion of the circle. You don’t have to worry about supporting the plate and the driver. If you attached the screws and magnets properly, they should stick to the base.

Now that both of your hands are free, you can work on the wires. Insert the wires of the driver into the connector. You’ll have to use a screwdriver for this step.

Step 5: Putting Back the Cover and Testing 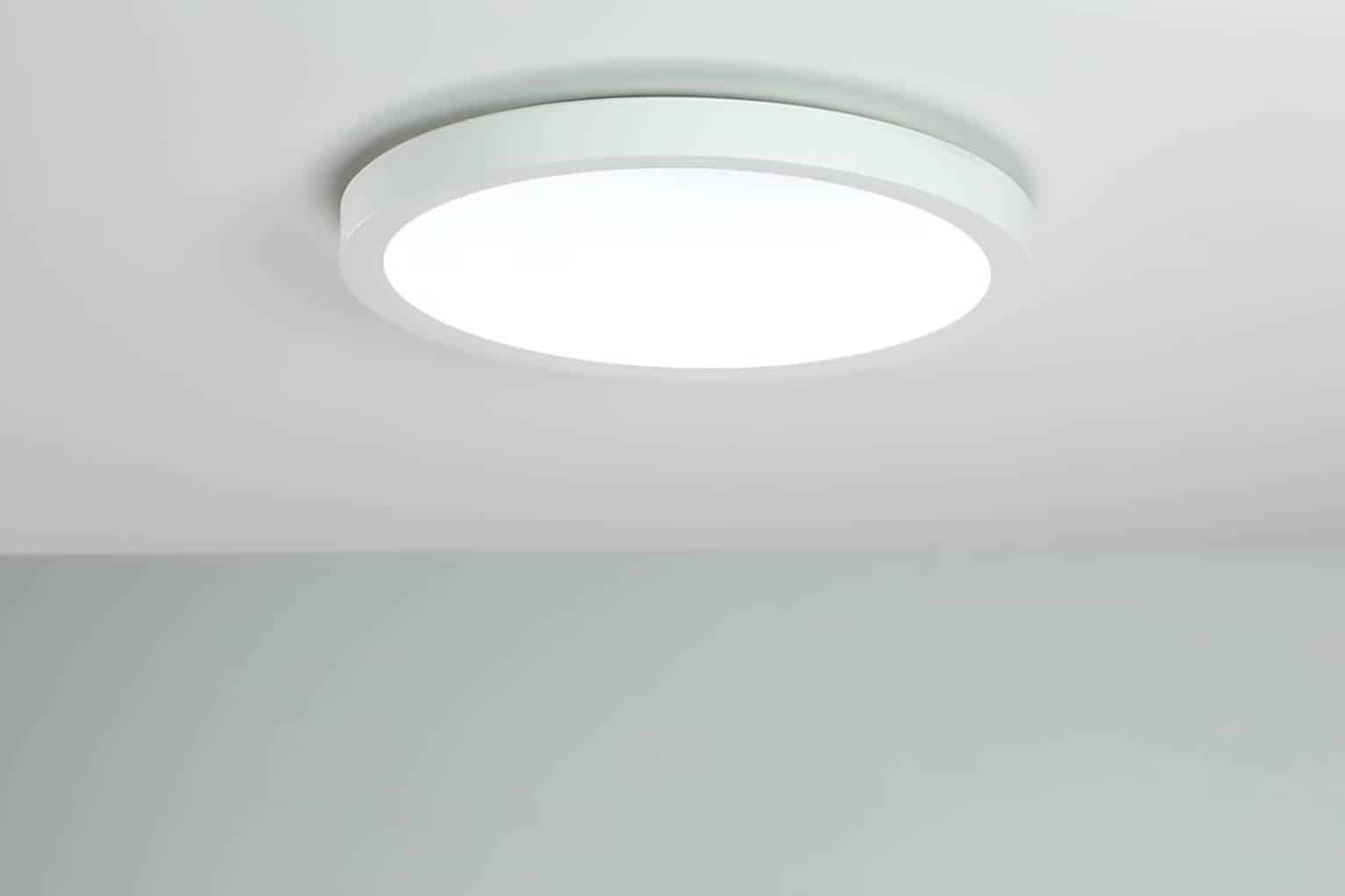 We know you’re excited to see your work. However, don’t forget to secure the cover!

Before doing so, you might want to give your masterpiece one last look to make sure you’ve put everything in its proper place. Once you’re happy with how things look, you can put the cover back on.

Once the cover is on, you can turn the power back on and see your work! Let it stay on for a few minutes to see if there would be any flickering or such. If it flickers, there might be something wrong.

Turn off the light switch immediately. You’d want to check on that but make sure you turn the power off again before doing so.

Once everything is a-okay, you might also want to give your ceiling light a good clean. As we’ve said earlier, specks of dust can gather on this area as it’s not often thoroughly cleaned or touched. Give it a good clean, so you can truly see how your LED light shines!

Other Things to Know

You now know the steps to replace LED ceiling lights. Now, here are some things you might want to consider before you go and tackle that ceiling light.

How to Install Recessed and Mount LED Ceiling Lights

As promised, here’s how you can replace your LED ceiling lights if it’s a recessed or mounted one.

Switching to an LED Ceiling Light

That is because you’ll have to clear the base. You might have to take out the ballast and hooks, for example. You won’t be needing these things for your LED ceiling light anymore.

Switching from One Type of LED Ceiling Light to Another Type

There are different types of LED lights. Now, if you decide to switch from one type to another, it might prove to be more challenging.

Different types of light need different electrical works. Say, you want to switch from a simple LED ceiling light to a recessed one; it won’t be that easy or safe to do it yourself. You might want to call a professional for this change.

Preparation is the Key

If you make the proper preparations, things could go fast and smooth. Make sure everything you might need is within your reach. Also, have a plan on how you’ll tackle it. It’s easy to just go for it, but having a plan could save you some precious time.

How to replace LED ceiling lights?

Trying out new things and tasks could be fun. However, sometimes, they can also overwhelm. As you’ve seen with today’s discussion, though, replacing LED ceiling lights is not that difficult.

It’s easy! It’s not an endeavor you’d want to back out of! So, go ahead and change those ceiling lights!

Did we get you out of the dark with this little guide? We hope so! Did we? You might want to give our other bright and shiny talks a shot, then. We might have the light bulb idea to cast some light on your problem! We’ll see you around!