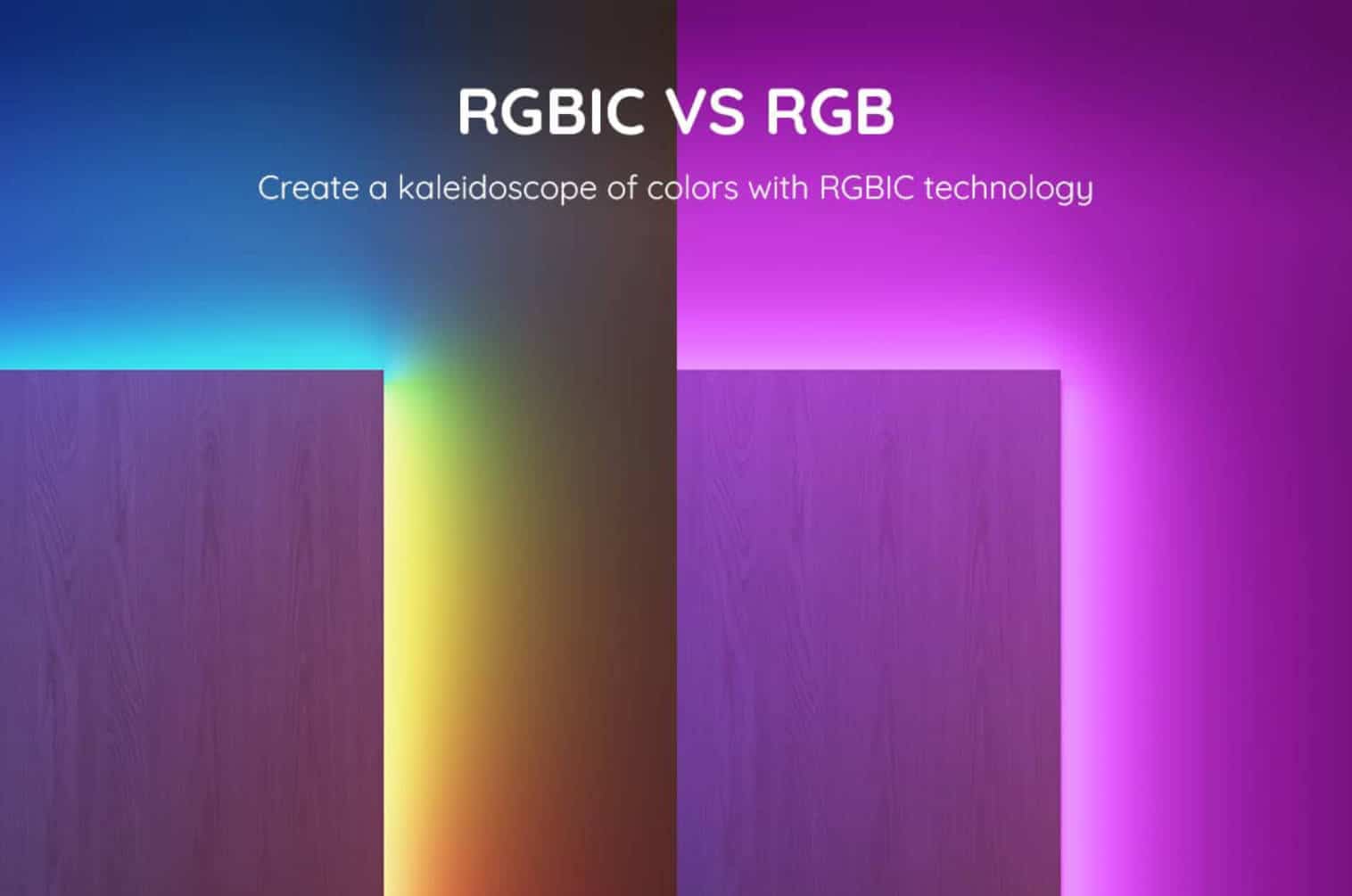 With the vast advancement in LED technology, choosing to install RGB or RGBIC LED Strip Lights may get confusing and tricky on your part as a consumer. Because they are similar, you might be wondering what the difference between RGB and RGBIC is.

We’ve made a summary of their features, key differences, and uses in this article. You’ll also get to know answers to common questions about RGB and RGBIC LED Strip Lights.  Let’s dive in!

What are RGB and RGBIC Lights?

It’s amazing how LED technology continues to improve. Many variations of LED lights and advanced features are arising as this technology becomes popular. To grasp their differences later on, it’s best to learn what RGB and RGBIC lights are first: 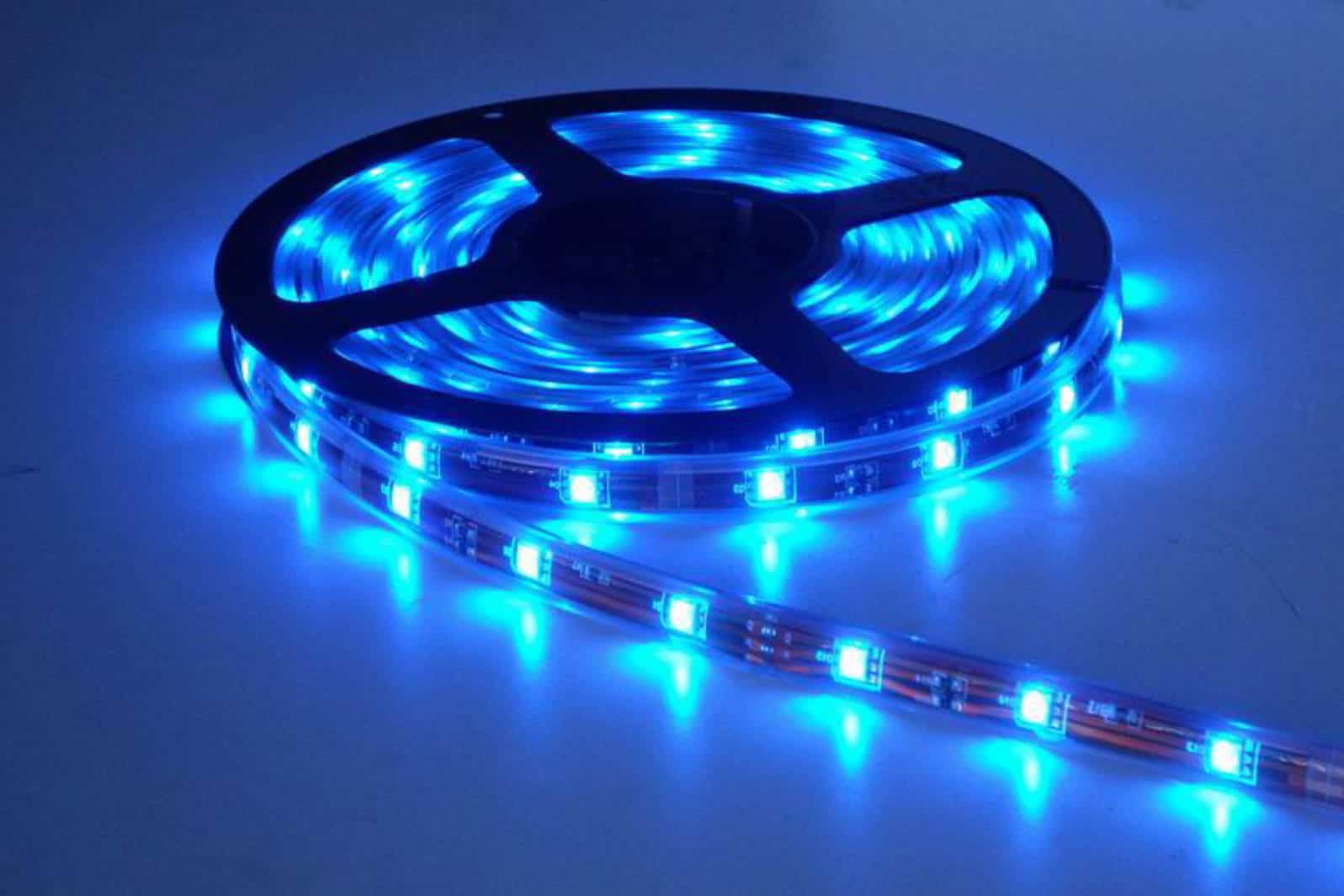 RGB Lights comprises Red, Green, and Blue channels that emit these 3 colors to produce over 16 million color selections. They are color-changing strips that can give off multiple shades of hues at a time. This output can be altered using a controller.

RGB lights are also capable of producing white light by mixing those three channels at full brightness. However, there is a new variation called RGBW, where an extra white chip is added alongside red, green, and blue channels.

With the number of colors RGB lights produce, they are perfect for both indoor and outdoor settings – even in cars and business establishments. They can be used in the following areas: 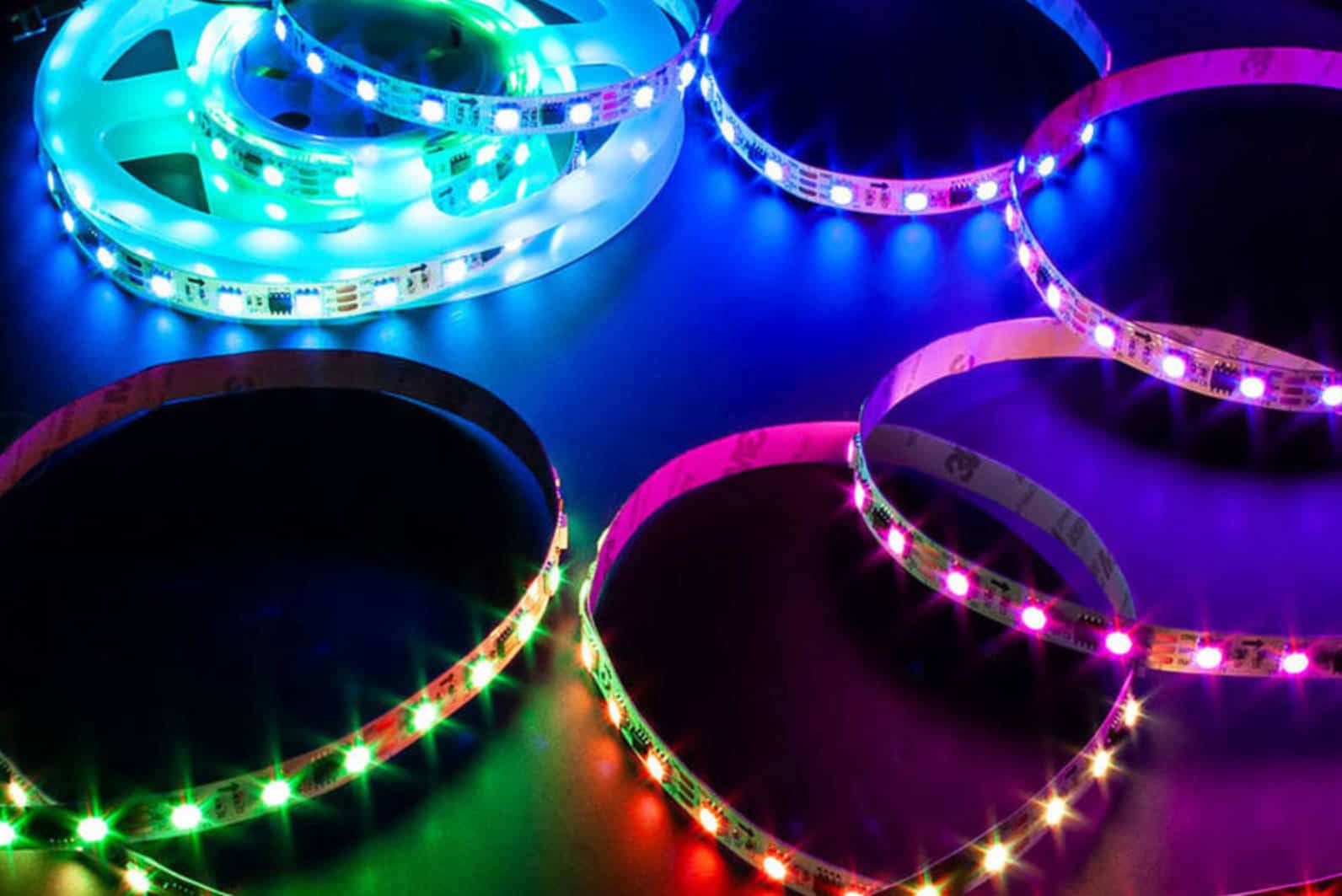 IC chips are “Independent Control” or “Integrated circuit” chips that allow you to display multiple colors on each light segment at once.

RGBIC LED Strip Lights are one of the latest advancements in LED technology. This development lets you transform your space into a lively area whatever the purpose is.

RGBIC lights are ideal for bedrooms, signages, or decorations if you want to give these spaces a new and unique feel. For areas needing task lighting like the functional areas of your home, consider RGB instead of RGBIC.

You may opt to install RGBIC LED Strip Lights in the following locations:

Now, let’s move on and discuss the difference between RGB and RGBIC LED Strip Lights.

1. RGB Lights can only produce one light at a time; RGBIC Lights can give off multiple colors in a segment at once 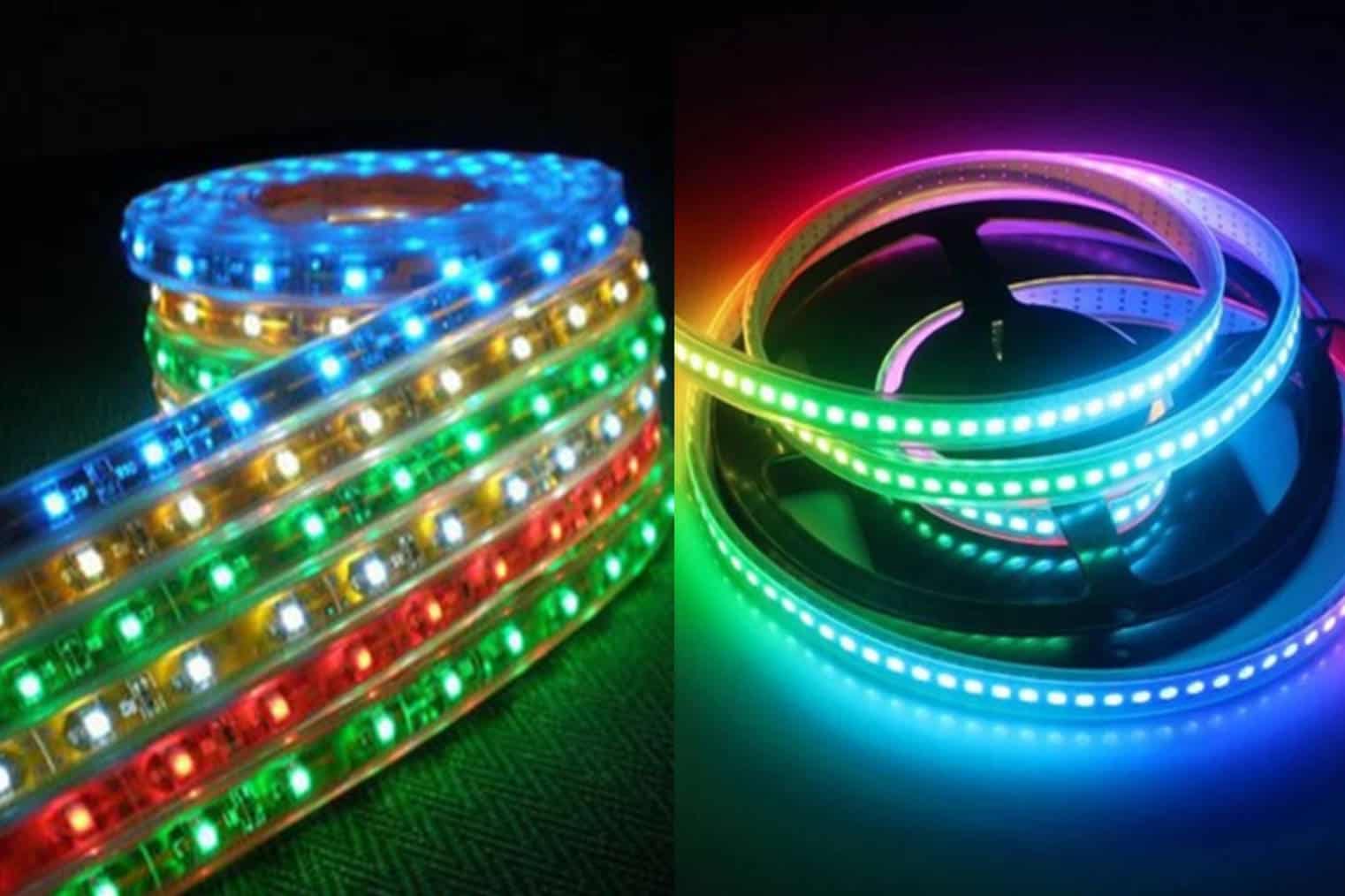 One of the key differences between RGB and RGBIC LED Strip Lights is the number of colors they can produce at a time. RGB LED Strip Lights are limited to one color at a time, while RGBIC Lights’ segments can be changed into different colors at the same time.

This key difference makes RGBIC Strip Lights more applicable for parties, events, and unique settings where you want pops of different colors. So, if you want to display various colors at once, choose to install RGBIC Strip Lights.

Because of the IC chips integrated into RGBIC Strip Lights, cutting them can damage the strip, making them impossible to turn on again.

RGB Strip Lights can be easily cut by following the black lines along with the copper bands. This advantage favors RGB Strip Lights because you can fit these lights into smaller spaces and even connect them with other lights after cutting.

Connecting RGB Strip Lights may be done using a quick connector or soldering the LED strips together. It’s a fairly easy process and you do not need any special equipment to complete it. 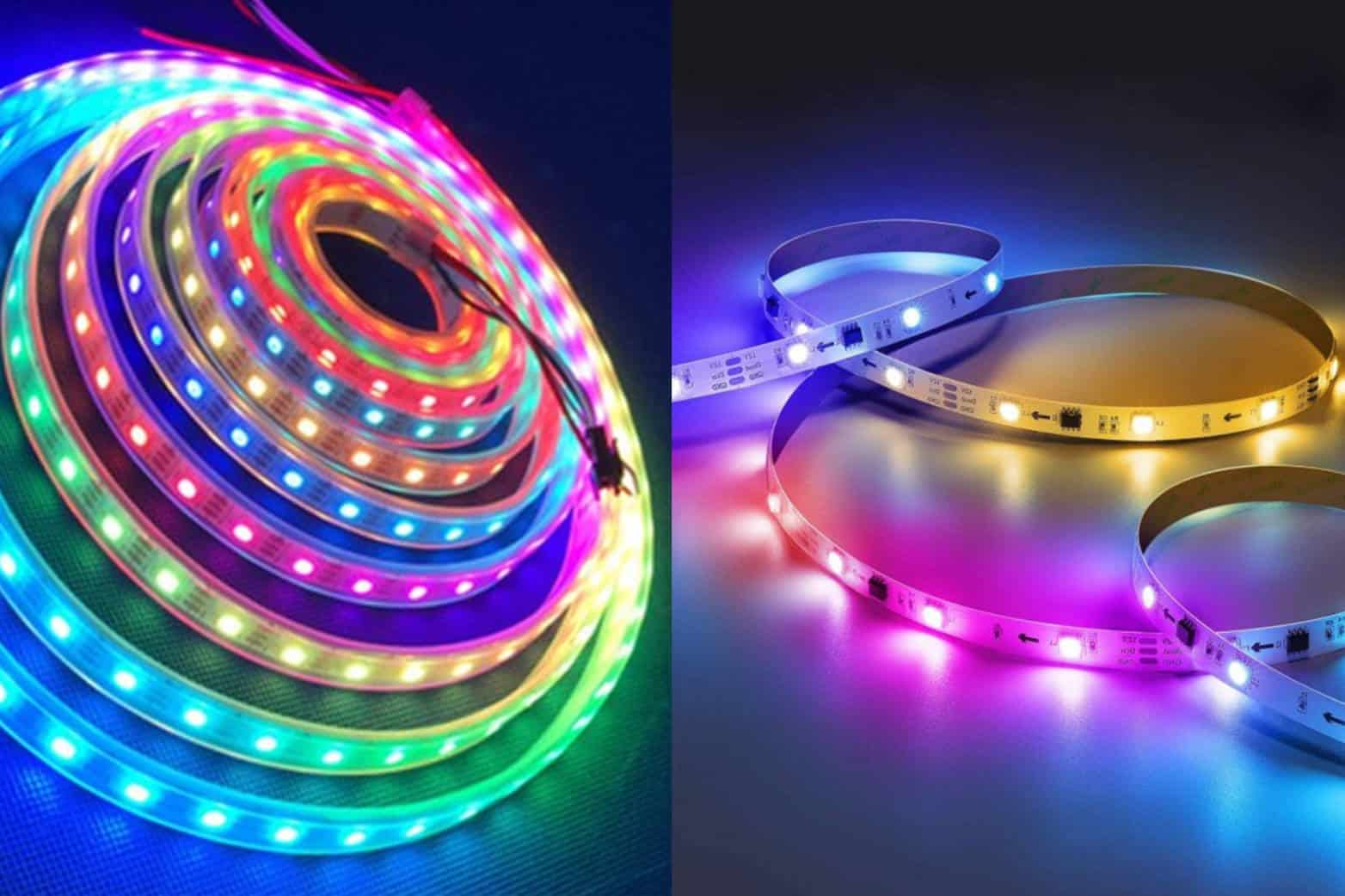 RGBIC Strip Lights are considered “Ultra Bright”. This is why leaving them on overnight may not be good for your sleep.

It may cause sleep disruption, so make sure to turn them off before sleeping. Even at minimum brightness, some consider RGBIC Strip Lights too bright.

RGB Strip Lights are not necessarily dim, but they give off less intense light than RGBIC lights. However, because their brightness levels can be adjusted, setting them at the maximum brightness level is often sufficient.

4. RGBIC Strip Lights are a trademark of Govee

Govee is a brand specializing in smart lighting, LEDs, backlight, and strip light. Thanks to this brand, they made an intelligent technology advancement in LEDs: RGBIC Strip Lights, which is a trademark registered by their brand.

Since 2017, they have been creating cutting-edge LED devices that help build a smarter home. 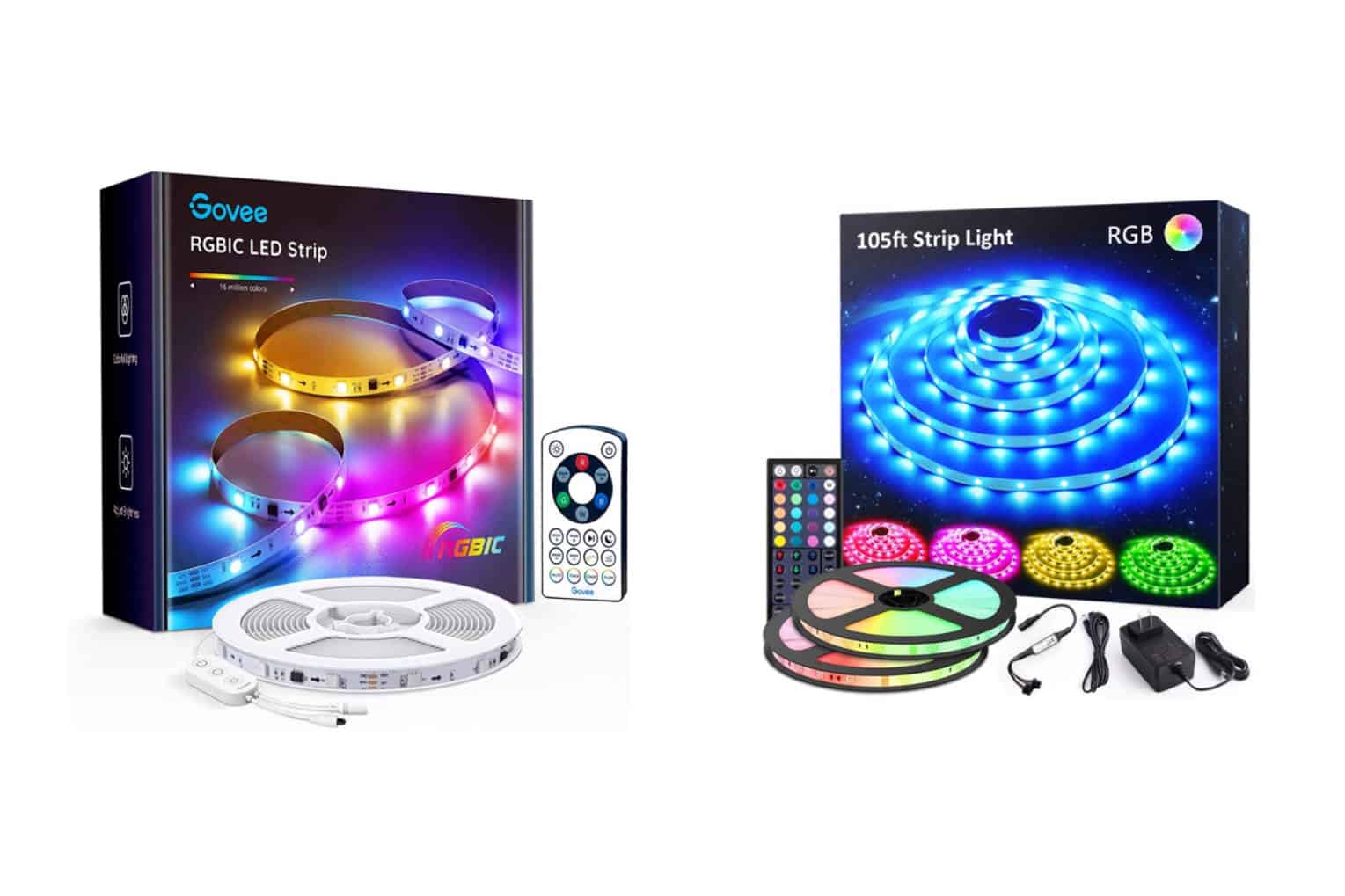 Govee strip lights are known to be cost-efficient. They have fair and affordable prices for their products. But, when comparing RGBIC LED Strip Lights to RGB Strip Lights regarding prices, RGBIC usually costs more.

For instance, a 2*16.4ft Bluetooth RGBIC LED strip light costs around $40 while an RGB variation of the same length costs around $30.

However, other brands have higher prices than Govee. Some brands have RGB lights costing twice as much as Govee’s RGBIC Strip Lights.

What are the other types of LED strip lights?

While RGB and RGBIC are already great options for LED strip lights, there are also different variations available. These types depend on color mixing, where color selection broadens for every kind, giving off different kinds of colors for different situations.

Here are some of the other types of RGB lighting and their functions:

RGBW LED Strip Lights are made up of Red, Green, Blue, and White channels. With an added white chip, this gives off a purer white tone which brightens a space even more. They produce more refined colors, too.

You just learned about RGBW and you might be wondering why there is an added W to this variation. RGBWW LED Strip Lights uses a 5-in1 LED chip with Red, Green, Blue, White, and Warm White channels.

For this reason, RGBWW lights create a warmer light with a yellow-white tone. This is perfect for bedrooms and living rooms as they make you feel a cozy ambiance. Not only that, but it produces a more welcoming and relaxed vibe.

The list goes on! RGBCW LED Strip Lights are made up of Red, Green, Blue, Cold, and Warm tones. These are used for super bright lighting, color-changing lamps, and outdoor smart light.

Not only can it give off warm white for a cozy ambiance, but it can also create a cold light which is good for mimicking natural sunlight.

The Differences Between RGB vs RGBIC: Tabulated

The differences between the two types of LED strip lights may be simple, but these are big differences that you should understand before you shop for and install them.

Which difference between RGB and RGBIC weighs the most for you? Choosing between these two lights all boils down to your preference and desired outcome.

If you need a simple and customizable LED strip light that you can cut, go for RGB Strip Lights. If you are into a more colorful and vibrant lighting set-up and spending more isn’t a worry, then going for RGBIC LED Strip Lights might be your better choice.